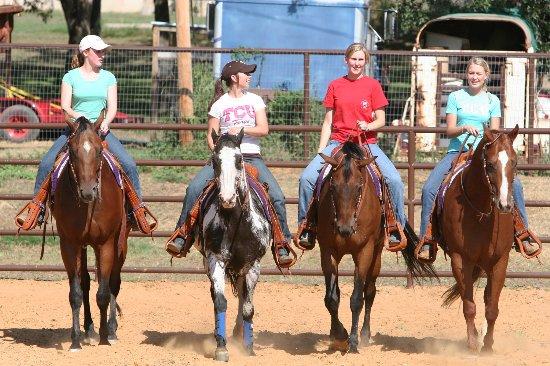 FORTWORTH, Texas — Members of the equestrian team will enter this weekend’s Varsity Equestrian National Championships with an odd matchup in the individuals bracket – they will be facing themselves in the opening round Friday.

Senior Carrie von Uhlit and junior Kelsey Huffman will face each other in the opening round of the individual competition around 3:15 p.m., something that head coach Gary Reynolds said was an odd situation that went away from the seeding formula.

“It’s difficult to bring your riders together and have to coach them to beat each other,” Reynolds said. “I’m not sure how you do that yet.”

Huffman said that at the end of the day von Uhlit would just be another competitor and that there would be no animosity. Von Uhlit actually helped her prepare for the match all week, she said.

“Honestly, for me it’s not really an issue,” von Uhlit said. “I mean, we are such good friends, and it’s the team first, individuals second. It’s really funny, we are both helping our competition and making it harder on ourselves. I haven’t even thought about individuals first; it’s always the team first.”

While the Hunt Seat squad slipped into the tournament as the No. 12 seed, they upset No. 5 Baylor 5-3 in the opening round Thursday. Reynolds said they were a better team than their record indicated.

“We played the toughest schedule you could possibly play this year (in the Hunt Seat) and it caused us to not have quite as good of a record as we normally do,” Reynolds said. “We have played virtually all the Top-10 teams at their home this year, so we are looking forward to having them on a neutral turf.”

If the Western team faces No. 1 seed Texas A&M in a rematch this weekend it will be in the semi-final round.

“It was a tough defeat last year to end reserve and get beat by Texas A&M,” Reynolds said. “(The Aggies) are a big rival and they are a great team.”

Huffman said that while the team is prepared to face any opponent going into the tournament, the Aggies are definitely on their radar.

“I think they are always our biggest rival just because they have a really solid team and they are really good riders,” Huffman said. “They always stick out on our minds just because they are good. We are preparing to beat everyone we come against, but of course we want to beat them too.”

Both Western and Hunt Seat squads made the tournament for the second year in a row, while Western has qualified four years running.

“We’ve just seen incredible improvement as far as the team work and all of the hard work that’s going into it,” von Uhlit said. “It’s just an incredible change.”

Von Uhlit said that while the team practices all year long to be good, the team’s strategy is to peak at the right time to be at its best for nationals.