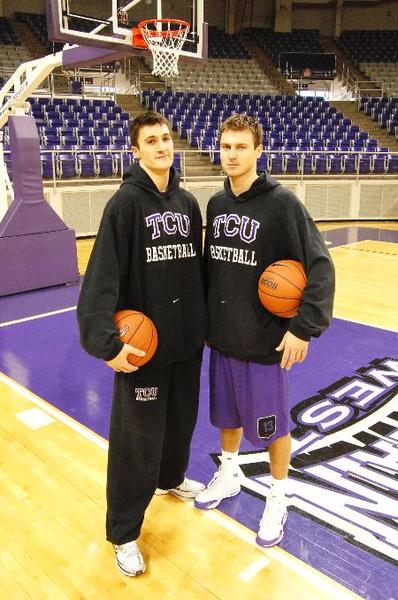 Zvonko Buljan and Edvinas Ruzgas aren’t your typical Horned Frog basketball players. They both grew up more than 5,000 miles away in different parts of Eastern Europe. But their lives have at last intertwined at TCU, and it couldn’t have come at a better time for the men’s basketball team.

The two juniors, both new additions to this year’s team, currently rank second and third in scoring on the team. Their presence in the lineup is a big reason why the team has found so much success this season. With a conference record of 4-1, the team is off to its best start ever in the Mountain West.

The routes they took to Texas are vastly different, but what’s important is that they eventually made their way here, thanks to new head coach Jim Christian.

Buljan, a 6-foot-9 center, hails from Split, Croatia. A former member of the Croatian Junior National Team, Buljan played at Vincennes University in Indiana until he joined the Horned Frogs for the 2008-09 season.

Buljan, who grew up idolizing former NBA player and fellow Croatian Toni Kukoc, said it means a lot to him that he and his teammate are from the same region.

“It means a lot because we’re both here from Europe and we kind of have the same mentality,” Buljan said.

Ruzgas is a native of Vilnius, Lithuania and a lifelong Kobe Bryant fan. He had most recently been playing at nearby Weatherford College. Then coach Christian came calling.

Ruzgas said that playing overseas has been a great opportunity for him.

“It’s really special because that was my goal the whole time – to go to school over here and get an education and play college basketball,” he said.

Ruzgas said both players have adjusted well to the American style of basketball, but the two of them also see things differently on the court because of their similar backgrounds.

“It’s a little bit different because in Europe we play a lot more as a team,” Ruzgas said. “Here’s it’s more individual play. But I think we got used to that and we’re doing a pretty good job.”

Not only are the two players a dynamic force on the court, they also happen to be roommates off of it.

“We’re good friends,” Ruzgas said. “We get along really well. We talk a lot and he tries to teach me some Croatian language.”

And though he’s been in the U.S. for a few years, Buljan said his new surroundings in Fort Worth suit him just fine.

Christian said Buljan and Ruzgas have been important to his team this season.

“They came in with some experience,” Christian said. “They’re two very skilled players. They’ve had a real positive contribution to what we’ve done.”