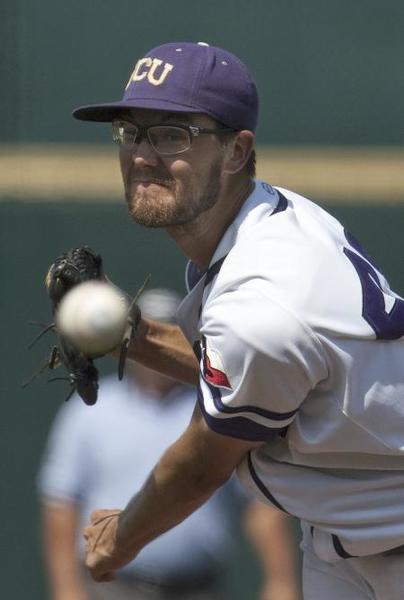 While the season may be over for the TCU Horned Frog baseball team, some players will get their shot at making it to the major leagues. Three Horned Frogs are expected to be selected in the 2011 MLB Rule 4 Draft tonight.

Sophomore Matt Purke and junior Kyle Winkler and have both been highly touted by baseball scouts, and are predicted to go in the early rounds of the draft. Steven Maxwell, who also is predicted to be selected, was drafted in round 12 by the Minnesota Twins in 2010.

Purke was originally drafted in the first round by Texas Rangers in 2009, but the two sides could not come to terms on a contract, so he enrolled at TCU. Winkler was initially drafted out of high school in round 38 by the Milwaukee Brewers in 2008, before electing to come to the university.

Purke is rated as the No. 27 prospect by Jonathan Mayo of MLB.com, and wrote “when healthy, Purke is one of the most complete pitchers in the draft.”

Kevin Goldstein, a writer for BaseballProspectus.com, wrote in an email that Purke, because of his injuries, is somewhat of an unknown to many teams. “

Purke is just a massive wild card in this draft,” Goldstein said. “Nobody has a good feel for just how healthy or not he is, and he’s still expected to want a ton of money. There’s definitely a solid chance he just goes back to school and tries to have a healthy junior year.”

Goldstein did also say that if Purke were to utilize his full potential, he could become a “star-level big league starter.” Keith Law of ESPN.com has Winkler rated as the No. 43 prospect available, writing that he is one of the best potential relief pitching prospects in the draft. Goldstein said Winkler’s performance this season turned many heads in the baseball community.

“[His draft stock] went up considerably, to the point where he was in some mixes for the late first round,” he wrote.

All three players have been either battling injuries this year, as is the case with Purke, or are currently sidelined, like Maxwell and Winkler with injuries.  Winkler was taken out in the first inning Sunday after aggravating his injury in his right arm in an 8-4 loss to Oral Roberts University in the Fort Worth Regional, which ended the Horned Frogs season.

Goldstein wrote that he believed the injuries to both Purke and Winkler will cost them a chance at going in the first round, but he could see both of them going soon after.

The draft will begin at 6 p.m. and will air on the MLB Network.