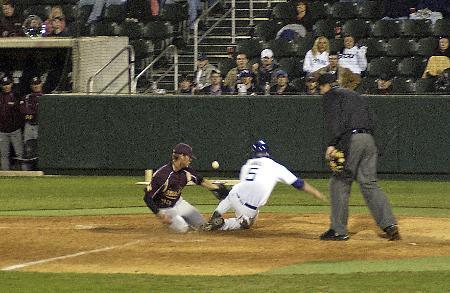 Lupton Stadium turned into a chessboard during the late innings of the Wednesday night game between the TCU Horned Frogs and the Texas State University Bobcats.

With two outs in the top of the ninth Jim Schlossnagle’s Horned Frogs were within one pitch of shutting the door on Ty Harrington’s Bobcats.

Unfortunately, a wild pitch from closer Andrew Cashner changed the course of the game from a night highlighted by strong TCU relief performances to an 11-inning marathon. Luckily for the Horned Frogs, now 5-4, were able to come out on the winning side of the 4-3 ballgame.

Though Cashner was responsible for allowing the tying run to score it was a series of baserunning flubs by the Horned Frogs that perpetuated the game.

“There’s not much you can say about a guy who has his head down and is running hard and wants to score,” Schlossnagle said regarding center fielder Clint Arnold‘s botched tag-up sequence in the ninth inning that caused a double play and sent the game into extra frames. One inning later, Bryan Kervin missed a sign for a squeeze play with a runner charging home, killing a possible rally in the 10th.

Starting in the eighth inning the teams combined to use seven pitchers while continually rearranging the lineup cards in an effort to scratch across the elusive fourth run. Texas State resorted to using the starting third baseman, Lance Loftin as a late-inning reliever.

The heroes for the Horned Frogs were Brett Medlin and the pitcher of record Eric Marshall. Marshall (1-0) had two innings of work and notched his first collegiate win while preserving the 3 1-3 innings of scoreless relief thrown by Trent Appleby earlier in the ballgame.

“Eric Marshall was the difference in the game to me,” Schlossnagle said of Marshall’s longest career outing. He had one strikeout in two innings pitched.

During the middle innings, Appleby and his sidearm delivery managed to keep the Bobcat hitters honest as he worked a combination of fastballs and sinkers for a majority of groundball outs.

The game finally came to a close in the bottom of the 11th inning when Ben Carruthers laced a triple into the left-center field gap that was just beyond the reach of center fielder Laurn Randell. Carruthers would stand on third base as Harrington took a gamble and called for intentional walks to the next two Horned Frogs batters to keep a force play at home plate in line.

The next batter for TCU was Brett Medlin.

“I was thinking fastball and looking for something to drive,” the redshirt freshman said. “He threw it side-armed and it kept running in and I kept my hands inside and hit it into left field.”

Medlin’s single shut the door on the 4 hour 14 minute game and put the Horned Frogs on a two game winning streak heading into the weekend showdown with No. 2 Ole Miss.