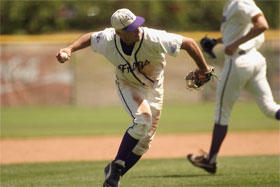 The scenario is classic: full count, bases loaded, two outs, bottom of the ninth. The pitcher glances at the catcher and nods his head from behind the glove he holds clasped to his face. The hitter then glances over at the first base coach, who gives him a series of quick signals before the throw comes. The man on the mound confidently cocks his arm and blazes the ball right down the gut – seconds before the batter starts into his swing, powerfully ripping his bat through the zone, waiting for the contact to come.

And then, in that exact moment, one of the two comes to the sudden realization that he guessed wrong . and the other one guessed right.

Yes, baseball is a sport predicated on physicality, but the speed of a pitch is wasted if the thrower doesn’t know when to throw it; even the strength behind the swing is useless if the hitter reads the pitch incorrectly.

So in baseball, a sport born of tobacco-chewing and brawn, apparently mind still reigns over matter.

The relationship between opposing pitchers and hitters still has an undeniable physical nature – can he throw faster than I can swing? – but the heart of the matter still lies in one mind pitted against another.

Sophomore pitcher Sam Demel said the proper mindset of a pitcher can be the difference between an out and a run.

“If you take that mound and you think ‘Man, this guy’s really crushing the ball right now; he’s a really good hitter,’ you’re going to hang something to him,” Demel said. “If your scared to throw to the guy, he’s going to beat you. It’s as easy as that.”

But statistics are undeniable – some hitters are more proven than others, such as BYU’s Ben Saylor, who is batting .327 with 12 home runs and 39 RBIs. TCU sophomore pitcher Jake Arrieta said his approach to dangerous batters is anything but timid.

“I try to take the same approach with every hitter, but especially when guys that come up that you know are good hitters and have a lot of pop in their bat, you try and go after them a little harder,” Arrieta said. “Especially against BYU – Ben Saylor, their clean-up hitter, is a real good left-handed hitter. I just try to stay away from them, throw fast balls outside as much as I can . because you know on those guys, if you leave it over the plate, they’re going to hit it pretty hard.”

But baseball is not a game of forgive-and-forget. Since most starters will see each batter at least twice, Demel said, he keeps a running mental catalogue during games of what each hitter’s style is.

“When I start, my first time through the order, I throw my fastball,” Demel said. “I say ‘OK, who can hit this’ and then make a mental note through the lineup . ‘OK, first at-bat, that guy caught up to my fast ball,’ so next at-bat, I try a slider and mix it up a bit more and work off of a different pitch. You try and learn the hitter, the first at-bat and try to attack his weaknesses the second and third at-bat.”

But hitters are no dummies either — junior outfielder Keith Conlon said batters take the effort to remember things as well.

“If I see him my first at-bat and hit a fast ball for a base hit and I hit it hard, then the next at bat I’ll go up there and look for an off-speed pitch . because I probably won’t see it again because I’ve already done something with it,” Conlon said. “It just changes to what I did that at-bat . if I got out on that pitch, I might look for it again because he got me out on it.”

But as in all things in life, sometimes plans fly out the window. When that happens, Demel said, every pitcher has to fall back on what will work best in the current scenario.

Every pitcher is unique however, and Arrieta said each can be differentiated on what his strong points are.

But singular approach styles aren’t just limited to the mound; Conlon knows exactly how he works.

“I see myself as a fast ball aggressive, early in the count,” Conlon said. “I mean I’ll take a pitch, but I like to hit early in the count rather than at two strikes. I don’t mind drawing walks and stuff, but I’d rather hit in the first two pitches than say at four or five.”

Nothing may bring out the mental toughness of a batter or pitcher than a full count, however. Conlon said his take on the hurler is fluid when things change from a hitter’s count (3-0) to a loaded one (3-2.)

“It just went from being really selective at 3-0, because I’m probably not going to swing, and then at 3-1, I’m still looking for my pitch,” Conlon said. “If he makes a good pitch, I’ll foul it off. I have to expand the zone, I have to have that mindset. I cant be as picky with the zone.”

No matter what a hitter might be thinking, Arrieta said, there are clear parameters to what a pitcher should be throwing at certain counts.

But there’s a difference between a pitcher working himself into a full count and a reliever being asked to battle his way out of one. Senior pitcher Shawn Ferguson, who has worked as both a closer and a starter this season, said his focus on batters has to be more impromptu than planned.

“Mine’s so much more based on situations,” Ferguson said. “I’ll come in and I have a runner on second or third – especially with a runner on third – and there’s less than two outs – I can’t go right after him with a fastball. If I have a base open, I’ll work my breaking ball more because I don’t want to give into him.”

Although relievers are commonly brought into tough scenarios, Conlon said, he still reads over the team’s scouting reports before facing them.

“If they bring a guy in from the bullpen, I’ll go look at the scouting report again, get an idea of what he’s going to throw,” Conlon said. “It’s a good feeling when you know they got to the bull pen because usually your best pitches are starters . so the chance of him screwing up are a lot greater than probably the starters.”

Hitting coach Matt Siegel said regardless of the pitcher’s role, each batter should focus more intrapersonally than interpersonally.

“There’s very few pitchers we’ve seen this year that, personally, I would give enough credit to to say ‘Hey, this guy’s got such a good second pitch, and such command of that, that we have to sit on that pitch,'” Siegel said. “I think it’s more important for hitters to stick with their strengths.”

One universal strength for every hitter is that while each pitcher is unique, no one is a true inventor.

“It’s important for hitters to have an idea what pitchers throw, but you’re not going run into a guy that’s going to throw something that you’ve never seen before,” Siegel said. “I think it’s more important to realize what a pitcher can throw for strikes. If a pitcher has two different breaking balls and he can’t throw either one for strikes, then we don’t need to worry about that.”

Regardless of whether a pitcher is locating his throws well, Arrieta said, maintaining confidence is key to victory in the mental battle.

“Usually, you just got to keep your composure, because if your don’t, things will really start to fall apart,” Arrieta said. “There’s a lot of stuff that can get into your head, as far as the batter and all of that stuff. Just got to stay on the mound and work with what you’ve got.”

Take it from the expert: in baseball, you play with what you’ve been given, be that brawn . or brains.