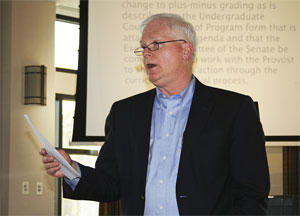 “A significant majority of faculty are ready for (plus/minus),” said Grant, chairman of the Faculty Senate Academic Excellence Committee.

But not all members of the Faculty Senate are pleased with the vote’s outcome.

“I’m not surprised, but I am disappointed. At least three universities have some indication that (plus/minus) is inflationary to grades,” said Faculty Senate member Dick Rinewalt, an associate professor of computer science.

In his private research, Rinewalt said, he found reports from the University of California at Los Angeles and Clemson University, which indicate that although average grades remained the same, there were higher numbers of A and B grades.

Prior to the vote, Faculty Senate chairman Andy Fort said there was nothing prohibiting professors from continuing to use the current grading system.

Rinewalt said, “It seems like we’re doing something that accomplishes nothing, so why do this?”

Grant said his understanding was that the negative vote from the House of Student Representatives was not against supporting plus/minus, rather, it was against the proposal because the student representatives felt they did not have enough information.

In addition to passing the motion with a vote of 16-5, Faculty Senate heard a report from the Faculty Senate Tenure Promotion and Grievance Committee about the service and advising requirements faculty must meet to gain tenure.

Faculty Senate member C.A. Quarles presented the report and said, “The committee has accumulated material of what colleges are saying about service and put it in a grid.”

Quarles said the grid condensed what departments, colleges and the university said about the service requirement for tenure and promotion into 25 pages.

Faculty Senate member Stuart Youngblood, chairman of the Tenure Promotion and Grievance Committee, said one requirement needed some clearing up.

“What we say (about service) doesn’t necessarily align with what we do,” he said.

Faculty Senate also passed a motion to endorse the creation of a University Compensation Advisory Committee, which will replace the Retirements, Insurance and Benefits Committee.