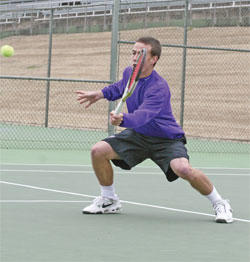 Despite a forty-five minute delay because of heavy rains and the threat of tornados in the area, the Horned Frog tennis team took on the Air Force Falcons Friday in the Friedmen Tennis Center’s indoor facility. This tournament marked the Frogs first return to action since playing ten days ago but the frogs say it was a much needed break.

“We had a lot of little, nagging injuries because of playing in back to back games for so long,” said Stuart Row a junior on the team. “The ten days off was a way for us to take some time off and rest those injuries”.

“I think the most important thing for us as a team is to just hang tough and expect to win, at this point in the season we have seen the worst and now we have to just put all the pieces together and finish strong,” said Row.

Men’s head coach Dave Borelli said in order for the team to be successful they need to keep focus and enjoy playing the game. He said the game is not just talent but also a positive attitude.

With the victory tonight the Frogs improved to 3-1 in Mountain West Conference play and to a 7-11 overall record.

The Frogs swept Air Force 7-0 and will return to play Saturday, when they meet UNLV who upset No. 46 conference opponent New Mexico earlier Friday.