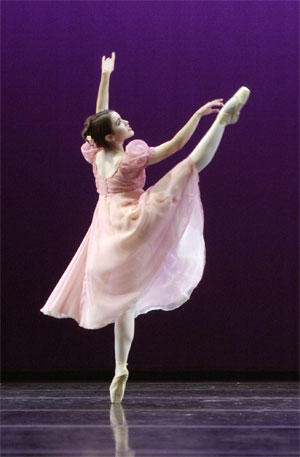 The Ballet & Modern Dance department will dance its fall concert Friday as a gift to TCU’s choreographer-in-residence, Fernando Bujones, who is currently battling cancer, said Ellen Page Shelton, chairperson and associate professor of modern dance. Bujones is the artistic director of the Orlando Ballet, and comes to TCU every semester to work with the students, Shelton said.

“He is a huge icon in ballet and a wonderful person to work with,” Shelton said. “The department looks forward to performing this concert in his honor.”

It is a varied program with a mix of ballet and modern dance, Barbee said.

The assorted selections can appeal to all audiences, Barbee said.

“It’s a good way to introduce people to something they may not be as familiar with,” Barbee said.

Heather Bays, a freshman ballet major, said she is excited and a little nervous about the performance.

Bays said she enjoys the pieces she was cast in but was surprised to be cast in two.

Bays was quickly cast in both pieces because of her talent and her ability to learn quickly and think on her feet, Shelton said.

Shelton said a goal in the department is to give all students performance experience each semester, and she looks forward to those opportunities.

Susan Douglas Roberts, a professor of modern dance, said she is impressed by the abilities of the students and enjoys seeing them perform.

“The performances of our BFA students are extraordinary,” Roberts said. “We have 65 majors and a wealth of talent. As a faculty, we are all undeniably proud of them.”

Roberts said she is looking forward to seeing the works crafted by her colleagues and the guest choreographers.

“Generally half to all of the works are choreographic premiers by my colleagues and those professionals we invite as guests,” Roberts said.

Barbee and Bays are both performing in a piece by Li-Chou Cheng, TCU’s ballet master-in-residence.

Cheng said he is always nervous about a new piece, but that he is excited for the performance.

“I just feel the music gives me a lot of imagination,” Cheng said.

Cheng has been with TCU more than 10 years and always comes up with new, interesting work, Shelton said.

Barbee said there have been a lot of last minute changes because a few girls are sick with mono.

Nonetheless, things pulled together, Barbee said, and the show must go on.

“The concert is a culmination of the fruits of everyone’s labor,” Shelton said.