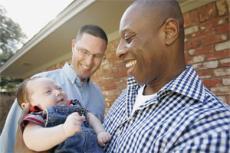 With long, thoughtful gazes at a 12-year-old photo of himself with his three triplet baby girls, this father describes his passion in life and his struggles as a parent with a touch of sadness and pain in his eyes, all the while holding a tiny, 8-pound bundle. The 5-week-old baby boy grunts and squeals as the man coos, breaking into a smile and laughing at the funny noises babies make. His smile spreads from ear to ear and excitement fills his voice.

David Jenkins, an associate professor of social work at Texas Christian University in Fort Worth, is not the traditional father.

He is gay, once married for 15 years to his high school sweetheart and a father of three girls.

Together with his partner, Bruce, who requested his last name not be used, Jenkins is helping to raise his triplet daughters, now 12, and a baby, Eric.

Jenkins and Bruce, together for four years, decided they wanted to adopt a child. Because gay couples in Texas cannot adopt, a decision had to be made: Who would be the adoptive father?

Bruce had always wanted a child, and as Jenkins is the father of three who share his last name, the choice was clear. Bruce would be the adoptive father, while Jenkins, in the end, would have no legal rights, as Bruce has no legal rights as a stepparent for Jenkins’ daughters.

The couple chose the route of open adoption, where there is some level of openness between the birthparents, adoptive parents and the child. Bruce and Jenkins settled on Hope Cottage Pregnancy and Adoption Center in Dallas.

After being approved in August to adopt, Bruce received a call in December about a child who was to be born just before Christmas. After being presented to the single mother, along with two heterosexual couples, the mother chose Bruce.

The first few weeks were what both Bruce and Jenkins described as a “whirlwind.” The couple had never anticipated getting an infant. They assumed no mother would willingly put her child with a gay couple, so they had hoped to adopt a boy of 6 or 7 years old.

Eric’s birth mother, however, is gay herself.

With no nursery, clothing or preparations made to support an infant, Bruce and Jenkins had to act quickly.

“The way we’ve fallen into caring for him and integrating him into our family is great,” Bruce said of the first weeks with Eric.

When Jenkins and Bruce speak of Eric, their voices light up and laughter fills the air. Jenkins, however, has a touch of sadness in his eyes and a slight edge of bitterness in his voice when he talks about his legal relationship to the child he considers a son.

Unless the laws were to change, Jenkins will never have any legal parental rights in Texas.

The hardship Jenkins faces with Eric is of the same kind he has handled since his acceptance and admittance that he is gay.

With another pause, Jenkins glances away and a haunted look briefly crosses his face – one that provides a short glimpse into a past as painful to describe as it was to experience. He tells of how he went from being the world’s best dad and someone others admired to being “questionable.” He was suddenly unfit and unacceptable.

Being from Louisiana and raised as a strict Southern Baptist, being gay was just not an option for all of Jenkins’ early life. He says even now, he is not immune to the words and messages he heard growing up.

“I knew I was attracted to guys, but I was raised Southern Baptist, and as a Southern Baptist where I was raised, there was no such thing as being homosexual,” Jenkins said. “It was a distortion, a twisting of God’s natural order to things, so there really was no kind of way for me to go, ‘Oh, maybe I am gay, and maybe I need to explore this.’ It was ‘no, I have this temptation; I need to overcome it, I need to move past this.’

“So that is what I was doing. I was praying for forgiveness for this temptation, for this desire and believing that was not a problem.”

After his father’s announcement that he was gay in 1979, followed by his sister’s coming out in 1991, Jenkins began to read outside of the Southern Baptist religion, thinking there might be another interpretation of the Bible. He said he even openly discussed and read about it with his wife.

“I think the unspoken text was, what I was doing was learning to accept myself,” Jenkins said.

Eventually, after 13 years, Jenkins told his wife he was gay. She insisted they go to counseling.

“She believed we needed to go to an ‘ex-gay’ therapist to get me fixed,” Jenkins said. But he wouldn’t go.

Jenkins describes the time after coming out as “the dark years.” He said most people assumed he would be celebrating and excited to be a gay man, but inside, he was struggling.

“I’m not immune to those messages that I’ve been taught all my life, that gay people are harmful to kids or that divorce is horrible,” Jenkins said. “Even though the research doesn’t back that up, you still sometimes have those little voices inside of you that kind of, ‘it would have been better if you were a straight man or played a straight man all your life.’

“I know intellectually I don’t believe that.”

After a stormy divorce and custody battle that eventually led to the Texas Supreme Court, life began to settle. Jenkins said he and his ex-wife have once again become close friends. And one thing still remains a constant: Their daughters.

Bruce and Jenkins’ sister, Debbie Jenkins, of Dallas, said Jenkins’ relationship with and dedication to his girls are what set him apart.

“He’s a very hands-on parent,” Bruce said. “It was surprising to me how much they would tell him. I’ve learned a lot about parenting by watching David with the girls. He really interacts with them closely – nothing really gets by him.”

Jenkins describes an e-mailing relationship he has with his girls, breaking into a smile. Some mornings he said he will wake up to an e-mail from one of the girls talking to him in confidence about things they are afraid to say aloud, such as ‘I wish I were prettier or more athletic.’

Jenkins said he lives for those e-mails as he again glances at the photo.

The sincerity and concern in his voice as he describes some of the obstacles the girls have faced along the way with having a gay father show his honest love, support and above all, understanding.

“They didn’t like being different. It’s difficult to accept that your daddy is different,” Jenkins said.

He recalls one of his girls coming to him and saying, “Dad, it would be so much easier if you weren’t gay.”

Jenkins casually shrugs and says, yes it would be. He compares it to having a mother who is blind.

“It would be a whole lot easier if your mother could see probably, but the fact is, your mother’s blind,” Jenkins said.

He said he deals with each incident as it arises, and he believes the girls are doing great knowing they have two parents who love them.

“I can’t imagine that they think it’s evil,” Jenkins said. “I just think they think their daddy loves them.”

Debbie Jenkins calls her brother a sounding board not only for the kids, but also herself. She describes him as a “rock” for his girls.

“He offers them a balance in life,” she said. “They get to see the other side of the picture with him.”

Jenkins’ ex-wife has since remarried and also has a child with her spouse. Both Jenkins and Bruce refer to the girls and Eric as “our” children, and nothing in this family belongs solely to one person.

Bruce said the month he spent away from the girls and Jenkins in Italy when he was finishing his Master of Business Administration made him realize just how much the girls meant to him – something he had never really considered before. He described how they would e-mail one another.

Those e-mails helped him get through that month, Bruce said.

“We pretty much plan our lives and schedules around our children,” he said.

Although this family has had troubles to overcome, and surely faces more in the future, Jenkins said, he is proud of the life he’s built as a father and as a spouse.

“Just because you’re different, doesn’t mean you have to avoid expanding your family,” Jenkins said. “I’m not ashamed of who I am.