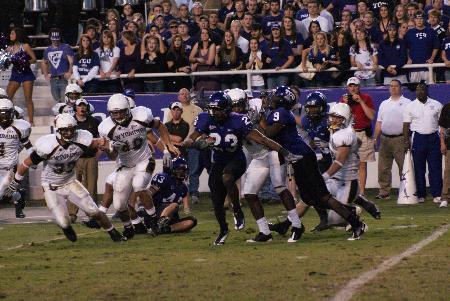 While the fate of the Frogs’ postseason is no longer in their hands, members of a fan Web site are trying to propel the team into the Sugar Bowl by writing e-mails to the game’s officials.

Athletic Director Danny Morrison said he is happy just to see the team in the mix.

“We are pleased that TCU is one of 18 schools under consideration for one of the BCS Bowl berths,” Morrison said. “However, it is likely that we will be in San Diego or Las Vegas.”

On the fan site www.killerfrogs.com, members have started a thread called “Letter to the Sugar Bowl, State your case for TCU.” The first post is a 917-word letter one Frog fan sent to Jeff Hundley, chief operating officer for the Sugar Bowl.

Overall, four letters have been posted on the site, and two other members have made postings saying they have sent e-mails to the committee.

Wes Phelan, partner for www.killerfrogs.com, said this wouldn’t be the first time TCU fans have helped the Frogs get into a bowl they wanted.

“You never know about fans’ e-mail campaigns,” Phelan said in an e-mail. “Ten years ago we got into the Sun Bowl and beat then No. 19-ranked USC, largely on the strength of behind the scenes efforts by TCU and the “out front” efforts by the fans. The Sun Bowl people were impressed with the show of support and took a chance on us.”

Phelan said TCU fans’ presence was the perfect present for the Sun Bowl committee in 1999.

“We rewarded them by selling out our allotment of tickets and then whipping the pants off of USC,” Phelan said. “So you never know about these kinds of campaigns. I am happy that our fans are making the effort.”

Phelan said because of the current bowl system, which he feels is flawed, fans have to do whatever they can to help their team.

“The entire calculus of the bowl system changed with the formation of the BCS and right or wrong, it is what it is and we have to work within the system for our shot at a ‘name’ bowl,” Phelan said. “Whether or not an e-mail campaign will help our chances remains to be seen, but it sure can’t hurt.”

This season’s Sugar Bowl will be on Jan. 2 at the Louisiana Superdome in New Orleans.