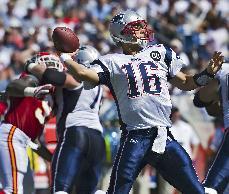 And with a mighty pop, down went the rest of the NFL season. Well not really, but it’s how many media outlets are playing New England Patriots’ Tom Brady’s season-ending knee injury.

It does hurt Patriot fans and Brady owners, but the league is bigger than one person and at least now we get to see if New England head coach Bill Belichick is the genius everyone in Boston thinks he is.

As for you weeping owners out there, take heart – this is the time to scrape the waiver wire for quarterbacks and trade material. The time to start shopping that Eddie Royal guy you picked up last week is now. Chad Pennington, Kurt Warner and other serviceable quarterbacks with upside are most likely still free agents as well.

But before we get into this week’s stuff, here are my thoughts for the week:

1. Aaron Rodgers can take a minute to awkwardly perform a Lambeau Leap and everyone laughs, but T.O. gets penalized 15 yards for taking 15 seconds to put on his best Usain Bolt impersonation?

2. Brett Favre looked good in his opener with the Jets, but imagine if he had taken Rodger Goodell’s advice and waited to sign with a team in need. He may have ended up on the visitor’s sideline of the battle in New Jersey this weekend.

And now the main event: this week’s top-three waiver wire adds and matchups to keep an eye on.

Devery Henderson (WR – NO): The injury and subsequent absence of lead wideout Marques Colston will propel Henderson into the starting lineup. He racked up 84 yards and a TD last week playing behind Colston, so it will be interesting to see what he can do with the starting gig.

Matt Cassel (QB – NE): This is the most obvious add I think I’ve ever endorsed in this column, but I would be remiss if I didn’t at least mention it. Clearly he won’t put up Brady’s numbers, but he could be useful for trade bait to Brady’s former owner. Most likely he/she didn’t invest in a backup after spending a first rounder on Tommy Boy.

Anthony Fasano (TE – Mia): The former Dallas backup is making the most of Parcells’ love for him. Fasano was part of Big Bill’s push to make the Dolphins into the East Coast Cowboys and as such immediately pushed incumbent David Martin to the background. Now that he has become a security blanket for Chad Pennington, he could become starting material for you, too.

Baltimore Ravens at Houston Texans: Rookie quarterbacks dominated last weekend, but in the case of Joe Flacco it was the defense that did all the playing. The Raven offense was led in rushing by a relative unknown in Le’Ron McLain, and with Willis McGahee on track to return this week, things only get murkier for the rookie quarterback. One thing is for sure though, the way the Ravens’ defense is playing, there’s little hope for Matt Schaub and company to help you much this week.

New England Patriots at New York Jets: The team Favre is playing for versus the one he could have been helping. Interesting to say the least. Also interesting is the fact that Sammy Morris had more touches than Laurence Maroney in the game. The only surefire starter for the Patriots is Randy Moss until the rest of the new Patriots’ offense settles into a rhythm. Brett Favre, Jericho Cotchery and Thomas Jones all figure to be back in your starting lineups while both defenses sit this week out.

Philadelphia Eagles at Dallas Cowboys: The Eagle faithful were quite excited about their impressive display of offense against a St. Louis defense that was ranked 21st overall last year. This week, their B-team wide receivers might not find it so easy against three pro bowl defensive backs. Donovan McNabb, Brian Westbrook and the team’s newest wideout, DeSean Jackson, won’t put up numbers like last week but should still be solid. All the Dallas starters should be in your lineup with the way they get up and down the field.