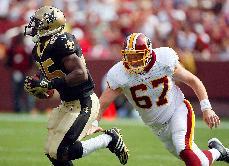 Last weekend was a dark one for zebras everywhere.

Ed Hochuli’s apology wasn’t exactly well received by anyone in the football world, and the NFL’s stern, “grading down” retribution was amazingly empty for all the San Diego faithful.

These guys do have tough jobs and have been defended by many because they have to get every call they make on every play right. But come on, they are getting paid, and it’s not the only job where people get yelled at for every single mistake they make. Everyone gets upset when a waiter screws up their order.

But before we get into this week’s stuff, here are my thoughts for the week:

1. Is there anything better than a Philly loss after all that yapping they do? The game shouldn’t have been nearly that close and wouldn’t have been if not for the Cowboys spotting them 21 points. Still, hell of a send-off for Texas Stadium and its place in “Monday Night Football” history.

2. I talk a lot in this column about class, usually people like Donovan McNabb and Bill Belichick’s lack of it, so you know Stanford’s band wouldn’t go unnoticed. What a disgraceful display and utter lack of sportsmanship. No one is happy to lose a game, especially the way they did Saturday, but if all the players and fans involved can be respectful, why should some Stanford band nerds feel the need to step in and tarnish a school’s reputation?

And now the main event, this week’s top three waiver wire adds and the matchups to keep an eye on.

Darren Sproles (RB – SD): LaDainian Tomlinson sat out Wednesday’s practice and is looking more like the Charger back who struggled in the playoffs than the one who dominated the regular season last year. Enter his wiry and speedy backup. Sproles looked startlingly fast against Denver, and once he reaches the open field, he’s gone.

John Carlson (TE – Sea): A new week, a new game, a new Seahawk wide receiver lands on injured reserve. The injuries continue to stack up for Seattle, pressing its rookie tight end into receiving duty. He hasn’t found pay dirt yet but he is quickly becoming Matt Hasselbeck’s only familiar option with 10 catches in the first two games.

Brandon Jackson (RB – GB): Ryan Grant continues to play through his hamstring injury, but it has held him back noticeably in his first two contests. Jackson busted through for 61 yards and a TD against the Lions, perhaps finally showing he wants some of the work load after last year’s disappointing debut.

New Orleans Saints at Denver Broncos: This could be another clash of high scoring offenses versus weak defenses. The Broncos struggled to contain Sproles so Reggie Bush owners can officially start salivating. Meanwhile, both quarterbacks figure to have huge numbers at the end of the day. Jeremy Shockey looks like he still has some work to do to get in sync with Drew Brees, while Eddie Royal proved he was no fluke. Watch Michael Pittman for Denver. He has found the end zone three times in the first two games and is vulturing goal line looks from Andre Hall.

Dallas Cowboys at Green Bay Packers: Dallas will fend off another team trying to prove it can play with the best in the NFC on Sunday night. Aaron Rodgers is about to hit his first speed bump after building confidence against cupcake teams. Ryan Grant may need to sit this week out for the Packers as his hamstring is bothering him and he goes against a rushing defense that has stymied both Jamal Lewis and Brian Westbrook in consecutive weeks. Greg Jennings is a good bet to slip by a still rusty Adam Jones for at least one score. Romo is going for his third straight 300-yard game to start the season and with T.O.’s help he’ll get it.

New York Jets at San Diego Chargers: The Jets’ defense played well at home against a wounded New England offense, but their offense was anemic. Favre looked like he still hasn’t learned Eric Mangini’s offensive system. The good news is he faces a San Diego defense that got decimated by a versatile Bronco team – and the referees – Sunday. Look for Thomas Jones to pick up the offensive slack for New York while Philip Rivers, Antonio Gates and Chris Chambers try and keep their rhythm alive against the Jets D.