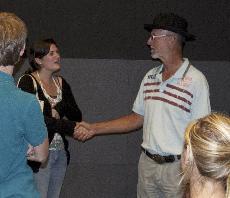 Michael L. Nelson, a university alumnus and professional film director, never received a degree in film, but he is now the owner and director of a production company that specializes in shooting commercials for food products.

Nelson spoke to a crowd of about 50 in Moudy Building South about filming food for television commercials and becoming successful in the film industry Wednesday night.

Nelson owns Noonday Productions, a commercial production company based in Dallas that specializes in tabletop production, the technique of shooting film of food products for television commercials.

Students were shown clips from work Nelson had produced for clients such as Papa John’s, Luby’s, Community Coffee, Dairy Queen and Joe’s Crab Shack. He explained how to keep food fresh with dry ice and how to fit a large amount of food onto a small surface. He also said the art of food styling is a difficult and necessary process because it involves making a product look like something consumers would want to eat.

Nelson began the presentation with a recap of his experience in the film industry.

“I’m a classic example of how not to do it,” Nelson said. “I’ve taken all the wrong steps and that’s part of what I want to share with you.”

Nelson attended the university on a football scholarship and majored in business, but said he wanted to do business for all the wrong reasons.

“Basically, I didn’t want to be a coach,” Nelson said. “I didn’t have to take a foreign language, my fraternity brothers were in the business school, and I said, ‘OK, I can do that.'”

It wasn’t until a college friend took him to a film class that he realized he wanted to get into the film industry, Nelson said.

“I wasn’t one of these guys that grew up with a camera in their hand,” Nelson said. “For me it was just escapism.”

Nelson said he graduated from the university in 1971 with a business degree but returned to school to take three film classes.

The filmmaker told students he began making motion picture films by working on the set of two movies early in his career.

Though Texas is not the hub for movie making, Nelson said tabletop directing emerged as a way to be a big fish in a small pond in Fort Worth.

“It’s very tedious – it’s a craft; it’s an art,” Nelson said. “You guys typically don’t go to film school and go through the whole process to come out and photograph chicken.”

Nelson said he works about 15 hours a day depending on the shoot but that he enjoys his work.

“I wear shorts and a lot of times cowboy boots everyday,” Nelson said. “The real great thing is loving what you do and making money simultaneously. It doesn’t get much better than that.”