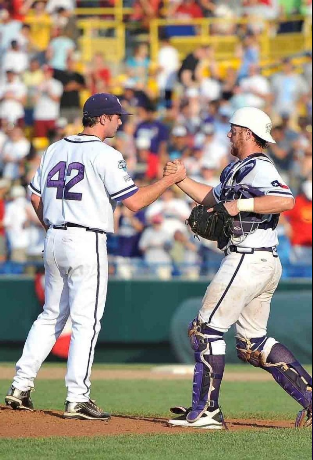 Five Horned Frog baseball players were drafted in the 2010 Major League Baseball draft and were placed on the rosters of minor league teams across the country this past June.

“That’s the benchmark for every team that comes through here now,” Coats said.

However, Holaday said he did not think the level of achievement reached by the former players created an unattainable legacy for the current lineup.

“I know that this year, this team is going to be just as good, if not better,” Holaday said.

Holle described leaving Horned Frog baseball at such a peak time of success as bittersweet, but said he is looking forward to starting a career in professional baseball. Being on the first team to make it to Omaha was definitely the right way to go out, he said.

“I’m pretty excited about the position I’m in,” Holle said. “I’ve been throwing the ball well so far.”

Both Holle and Holaday said they thought the training they endured as members of the Horned Frog baseball program prepared them for their future in the game.

“The coaching staff did a great job in terms of trying to evolve me as a baseball player and to becoming a professional baseball player,” Holaday said

Holle said the Horned Frogs have one of the best physical strength programs in the country.

Head coach Jim Schlossnagle said adjusting to the way minor leagues run versus the way the university does things would be tough on the guys. However, he said he had confidence that the former players would work hard and advance as far as their abilities would allow.

Holaday said he has one thing to share with his former team, “Don’t count the days, make the days count8212;especially you, Trent.”