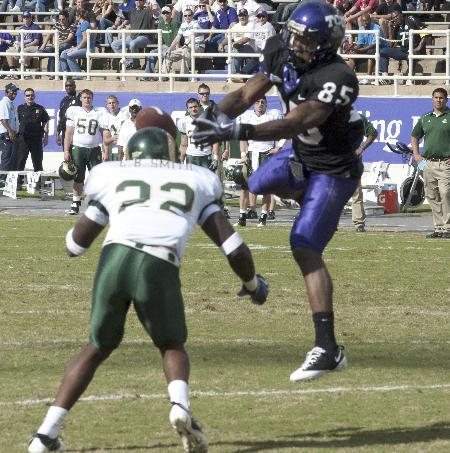 Kerley was named to three All-America teams last season and was the Mountain West Conference Special Teams Player of the Year. He led the MWC and ranked among the national leaders in punt return (14.4 yards) and kickoff return (26.6 yards) average.

Kirkpatrick was one of six finalists for the 2009 Rimington Trophy, honoring the nation’s top center. He was named a SportsIlustrated.com first-team All-American.

Kirkpatrick and Cannon both appear on the 2010 Rotary Lombardi Award Watch List.

According to NationalChamps.net, Cannon had a dominant 2009 campaign for the Frogs in being a first-team All-Mountain West Conference selection. He was ranked by ESPN’s football analysts Mel Kiper Jr. as the third-best offensive tackle available in the 2011 National Football League draft.

According to the website, Dalton is college football’s active leader in wins by a quarterback with 29 victories. He is also tied with Slingin’ Sammy Baugh for the most victories by a signal caller in TCU history in 1936.

Dalton, who received votes for last year’s Heisman Trophy, was the 2009 Mountain West Conference Offensive Player of the Year. He was one of 10 finalists for the Manning Award, presented to the nation’s top quarterback.

A Katy, Texas, native, Dalton ranked eighth in the nation in passing efficiency last season with a 151.8 rating. Among active quarterbacks, he ranks third in lowest career interception percentage (2.4, 24 picks in 1,001 attempts).

Evans was a first-team All-MWC selection in 2009 after making 15-of-18 field-goal attempts. The junior from Burnet, Texas, set a Horned Frog single-season record with 61 extra-points made, including 38 in a row to close the year, en route to leading the MWC in scoring with 106 points.