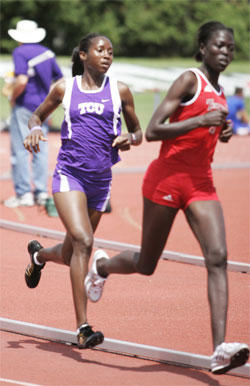 In their last home meet of the season the Flying Frogs battled strong winds and 11 other schools in the eighth annual TCU Invitational on Saturday.TCU earned nine first-place finishes and posted 16 regional qualifying times.

Going into Saturday the Flying Frogs had experienced problematic weather conditions in their past two meets that caused them to pull out of the Texas Relays and events at the North Texas Classic.

Head coach Darryl Anderson said that despite the wind he was happy with the weather and the overall performance of the team.

“I’m happy that it was warm,” Anderson said. “Nothings perfect but we had a warm day and we were able to get some things done. We won our share of events and now we move on to the Penn Relays.”

For the seniors it was the last home meet of their college careers.

Senior sprinter Nathandra John said it was difficult knowing that she would never compete again at the Lowden Track and Field Complex.

“I’m really sad,” John said. “Having to leave all my teammates and my coach is heart breaking.”

John’s last home performance was one to remember, as she won the 400 meters with a time of 53.85 and was on the winning 4X400 along with Marquita Davis, Deborah Jones and Kishelle Paul.

Of all the regional qualifying times there were four posted that hadn’t yet qualified for regional competition. Zelma wade in the shot put, Jonathan Jackson in the triple jump, the men’s 4X400 relay team and Neidra Covington in the long jump.

Covington overcame hamstring, ankle and heal problems that have plagued her throughout the season to earn her spot in regionals.

“I hadn’t made regional marks in the previous meets due to my injuries,” Covington said. “Today my injuries were ok and I was able to cope with it.”

Virgil Hodge, another standout athlete of Saturday’s meet, posted a time of 22.81 in the 200 meters, the second fastest time in the world and a new Lowden Track and Field Complex record.

The next action for the Flying Frogs will be the Penn Relays in Philadelphia on April 26.