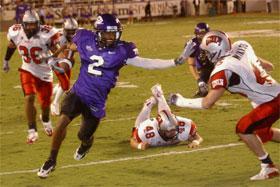 After completing an 11-game-in-11-week stretch with a 51-3 drubbing of Nevada-Las Vegas to seal an undefeated conference season Saturday night, the Horned Frogs have some time to do a little bit of scoreboard watching as other schools finish their schedules. Just don’t suggest to head coach Gary Patterson that the layoff between Saturday and likely a late-December bowl date will give the Frogs a chance to take it easy.

“What layoff?” Patterson said. “We’ll start Tuesday or Wednesday. We’ll start back in the weight room.”

The Frogs dominated UNLV from start to finish, but most of the talk after the game centered around bowl possibilities for the 11-1, Mountain West champion Frogs.

“(Athletics director Danny Morrison) and I are going to sit down here this next week and talk about what we need to do, and all of our options and what’s the best thing out there for TCU,” Patterson said.

The Houston, Las Vegas and Liberty bowls have been discussed as potential sites for TCU in the postseason.

The Frogs also have an outside shot at making a BCS bowl. The Frogs are No. 14 in BCS rankings released Monday. Finishing in the top 12 allows a team to be selected to play in one of four BCS bowls.

Senior free safety Jeremy Modkins, part of a defense that limited the Rebels to 25 rushing yards, 157 total yards and sacked quarterback Jarrod Jackson four times, said it doesn’t matter where the team goes for a bowl game, just that it has a chance to continue its winning ways.