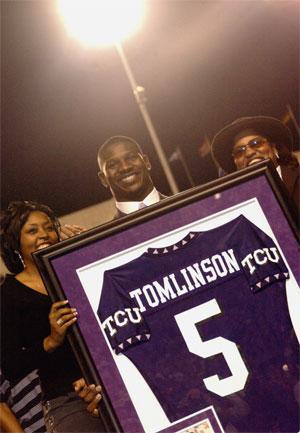 For the first time since he was drafted by the San Diego Chargers in 2001, LaDainian Tomlinson stood Saturday in Amon Carter Stadium, once again triumphant before hundreds of TCU fans who made no effort to hide their admiration and appreciation.The crowd cheered, the music played and the display screen streamed highlights of his illustrious college career as the emotions became clearly evident on the face of one of the most decorated Horned Frogs to ever play the game of football. If only for a few minutes, Tomlinson returned home.

Administration honored Tomlinson’s jersey during halftime of the Frogs’ final game of the season Saturday, commemorating not only his achievements on the field, but also recognizing the general studies degree he earned in the summer of 2005. His No. 5 jersey will not be worn by any other player without Tomlinson’s permission.

Before the game Saturday, Tomlinson said he was just taking his return slowly.

“It’s my first time back; I guess it hasn’t sunk in yet,” Tomlinson said. “I’m just going to try and take in the moment. I’m going to enjoy the game, reminisce a little. I remember all of it; I can feel it when I see the team warming up.”

Tomlinson said although earning his degree this late was not easy, it was still important.

“I always wanted to get my degree,” Tomlinson said. “I promised some people I would, but I also wanted it for myself. I had about 15 hours left, and in the offseason, I had the time to put the work in and do it.”

As the marching band made way for the ceremony during halftime, a chant slowly began that had gone unheard over the past five years – a chant of the nickname that has become almost more recognizable than the legendary TCU running back’s given name.

Athletics director Daniel Morrison said the reaction of the audience was indicative of the TCU community’s strong respect for Tomlinson.

“I thought it was a special time for L.T. and his mother, but I thought what was really outstanding was the reaction of the crowd,” Morrison said. “I think it was obvious that there was great affection for L.T. and his family.”

Morrison said TCU students and alumni are not the only ones that still respect Tomlinson.

“I thought it was a strong statement – the number of teammates that were there to support him,” Morrison said.

Tomlinson said he always tries to reciprocate the admiration shown to him.

“I know I like to brag on my school,” Tomlinson said. “I let them know in the locker room in San Diego; I always talk about it. I’ve made a lot of money off (the football team), too.”

Media relations marketing director Jeff Crane, who helped plan the event, said the ceremony was an opportunity for several groups to come together, but nothing else is currently planned.

Tomlinson did have several chances to be with the team this season, however. Tomlinson was on hand at the Frogs’ Oct. 29 game against San Diego State, and said he enjoyed the chance to talk to the team.

“I just tried to tell them about the time you put in when no one’s watching,” Tomlinson said. “Sometimes you don’t feel like doing it anymore, but that voice keeps telling you to be a champion.