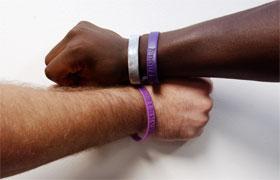 The football team just captured its first outright conference championship since 1958, and the players and coaches say it’s because they took each game personally.Purple unity bands imprinted with “Make it personal” have served as inspiration and a display of support for the team, head coach Gary Patterson said.

“It’s a chemistry thing for us,” Patterson said.

He said each year the team members have a slogan that helps motivate them in games, and this season needed an especially inspiring phrase – one that fit best on unity bands.

“Coming off a 5-6 season, we knew we would be playing with a chip on our shoulder,” Patterson said.

This season the players and coaches needed to take the games and make them special to each of them in order to win, he said. Each member had to be his own motivator, since the preseason rankings and predictions did not indicate people had high expectations for TCU, Patterson said.

“Everyone’s going to play hard,” he said. “What’s going to make us different?”

Jason Phillips, a sophomore linebacker, said the slogan helps to remind each team member of his responsibilities.

“In order for the team to be good, we all need to do an individual thing,” Phillips said. “We have to put it on a personal level.”

“It just serves as a reminder,” he said. “It can come for not just football, but for anything you try to achieve.

“You don’t necessarily do it for the glory as much as you do it for you.”

Patterson’s wife, Kelsey Patterson, said she and her husband decided to order bracelets this year so the team and fans alike would be able to show their support with 100 percent of the proceeds going to charity.

With the help of the TCU marketing department, the “Make it personal” unity bands, along with “Go Frogs” bracelets, have been sold for $5 each and benefited children affected by Hurricane Katrina, she said.

Past profits have gone to the American Red Cross through the Gary Patterson Foundation, which funds education programs for children from low-income backgrounds, and future sales will go to Project Purple, a program allowing disadvantaged children to attend the games, she said.