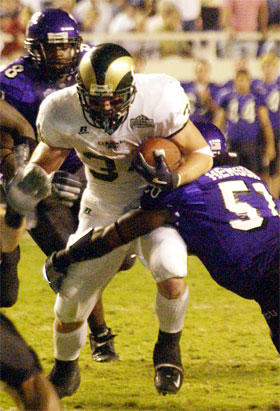 With the Mountain West Conference title secure and bowl game chatter increasing, TCU hopes to seal the season with a win against last place Nevada-Las Vegas on Saturday.”I don’t want to slip up against UNLV,” head football coach Gary Patterson said. “We want to be 10-1.”

The Horned Frogs will have to come ready to play against UNLV, Patterson said.

“They’re a lot like our offense in some ways,” Patterson said. “The problem they present is when their personnel group has five wide receivers.”

Passing for 300 yards in back-to-back games, UNLV quarterback Jarrod Jackson presents a threat for the Horned Frogs and their dream of an undefeated season in the MWC.

“They play pretty balanced,” TCU sophomore linebacker David Hawthorne said. “But they do have a big emphasis on passing.”

Despite UNLV’s 2-7 record, Hawthorne said the team has been practicing hard for the game.

“We’re doing everything we’ve done so far to get us in this position,” Hawthorne said.

UNLV tailback Erick Jackson, who has rushed for 558 yards this season, is another concern for the defense, Hawthorne said.

“He’s a good athlete,” Hawthorne said. “He’s always just one step away from breaking out.”

Freshman tailback Aaron Brown said, offensively, the Frogs need to stay focused to come away with a win.

TCU will face off against UNLV’s special teams, ranked second in the MWC.

Avoiding another upset, like the one against SMU, is vital to TCU’s season, Patterson said.

“We found out the hard way if you don’t come to play and the other team does, you’ll lose,” Patterson said.

He said TCU plans to continue to play hard to prevent that from happening.

“We wanted to make sure we kept our noses down all season,” Patterson said. “We want to celebrate with a win.”

The game will kick off at 6 p.m. Saturday at Amon Carter Stadium.