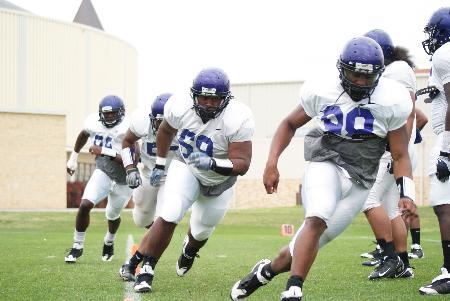 The calendar may still read March, but it seems like in Texas it is always football season.

The Frogs have gotten back onto the gridiron for a set of 15 spring practices, with the last one being the spring game April 4 in Amon Carter Stadium.

Head football coach Gary Patterson said he is glad to get back on the field, but thinks the spring is flying by.

“We’ve only got two more practices until we are half done,” Patterson said. “We will hit practice eight, then we go on Spring Break, then we have seven more when we get back.”

Patterson said he likes what his team has been doing on the field.

“You saw a lot more continuity today and a lot more physicalness,” Patterson said after Monday afternoon’s practice. “I think you will see more on Thursday.”

Patterson said he is using these practices as a way for his team to grow up.

“There are a lot of positions we have to get better at,” Patterson said. “Everything is about becoming a complete football team.”

 Patterson said there have been no major injuries so far, but wide receiver Jimmy Young did not fully participate in Monday’s practice as a precautionary measure.

 Junior center Jake Kirkpatrick is expected to take over the starting role after the graduation of second team All-Mountain West Conference center Blake Schlueter, but Patterson said he is a little behind after having problems with his appendix following the San Diego County Credit Union Poinsettia Bowl victory against Boise State.

 Young is also trying out a new number for the spring. The junior wide receiver wore number 88 last season is wearing number 1 during practice.

 Coaches from colleges around the country and local high schools were in attendance at practice and visiting with Frog coaches. The most notable college coaches were from the University at Buffalo and the University of Oregon.