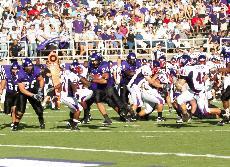 The Horned Frogs entered Amon G. Carter Stadium for their home-opener running through purple and white fireworks. Unfortunately for Stephen F. Austin, the fireworks continued when the TCU offense took the field.

Joseph Turner’s three rushing touchdowns fueled a 67-7 beating of the visiting Lumberjacks, the 67 points scored in a game was the second most in school history. TCU scored 68 in 1932 against Austin College.

“If you could write a script [for this game,] this would be what you wanted,” TCU head coach Gary Patterson said.

Quarterback changes, bad penalties and a lack of Aaron Brown may have served to slow the offense slightly, but it is hard to criticize any game where you out-rush your opponent 320 yards to three.

Patterson spoke highly of SFA’s skill position players, and said he expects the Lumberjacks to greatly improve on their record last year.

Offensively, the Horned Frogs cruised through the defense with several rushers posting big numbers. As a team, TCU averaged more than five yards per carry.

When TCU went to the air attack, they were just as effective.

Andy Dalton was the starter, but it didn’t take long for Marcus Jackson to get time under center and both were extremely polished in picking apart the Lumberjack defense. Dalton had a near-perfect first quarter, completing 10 of 11 passes for 116 yards, but came out of the game early in the second quarter, but returned in the second half. He finished the day with 131 yards through the air and completed 11-13 passes.

Jackson looked good from his first pass of the night, a five-yard completion to Jimmy Young. Young had the best receiving night of the Horned Frogs, catching seven balls for 104 yards. Jackson threw for 74 yards through the air with one touchdown, and ran for another 47 yards on eight carries.

“I was excited to get in to this game,” Young said. “We had a good game plan coming in, coach had us really prepared, and we were really confident in our offense.”

While the skill positions put up some impressive statistics, biggest difference between the teams was defined on the offensive and defensive lines.

“I was happy with the offensive line all night,” Patterson said. “We knew that [SFA] doesn’t practice against tight ends or a power offense very much, so we felt like we could line up and run a power game.”

All around, the defense put up an extremely precise performance, led by a great day from the defensive backs and linebackers in coverage. Also notable was redshirt freshman linebacker Tank Carder, who showed a penchant for big hits and big plays. He had two tackles (one for a loss) in the game, and brought the crowd into the game in the second quarter with a wicked hit on a kickoff.

Patterson specifically mentioned Carder as a standout player after the game.

“Carder came in and made some plays, saw a crossing route, ran a guy down on a sweep and we let him play on kickoff,” Patterson said.

The team didn’t miss star linebacker Jason Philips, who was out with an unspecified injury, but will likely need his help next week against a much-improved Stanford team with a strong running game.

“[Jason Phillips] could have played tonight if we wanted him to,” Patterson said after the game.

Now the team turns its focus to Stanford, the third game in a string of 11 straight weeks.

“When you play 11 straight weeks, you have to manage the game and manage the season,” Patterson said. “[In the second half,] we ran the ball, ate up the clock and scored a couple of times. We did exactly what we wanted.”

TCU avoided playing down to their opponent’s level this week and put together an impressive win without sustaining any injuries, which is all that was expected of them this week. Next week will provide a much tougher test for the Horned Frogs.

“Stanford is going to be a great opponent. It was a tough game last year, and it will be just as hard this year,” Dalton said. “We just have to turn our focus to them and study them and work hard this week.”

Stanford will visit Amon Carter Stadium next Saturday at 6 p.m.