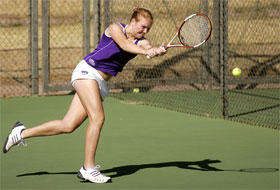 Though it may be difficult to leave behind a family and home country to attend school in the United States, TCU women’s tennis players have managed to do it, while at the same time mastering their games.Junior Ana Cetnik, who came to TCU her freshman year from Belgrade, Serbia, said it was hard to adjust at first, but she feels more at ease with her surroundings now.

“It took some time to adjust because everything is so different here,” she said. “People are more individualistic. I had to adjust to living and being alone and also had to eat different foods. It’s prepared and cooked differently here than in my country.”

Cetnik, who began playing tennis in her country when she was a 6-year-old, also said that since coming to America, she has had the opportunity to practice more than she had while growing up.

“My country was at war so I didn’t even get to practice but once or twice a week from when I was eight until I was 10,” she said. “I didn’t get to start practicing everyday until I was 11 years old. Now I get to practice all the time since I am part of the team, which has helped my tennis mature.”

Head coach Dave Borelli said that the girls on the team who are from foreign countries have great work ethics, both on the court and in the classroom.

“They are all very exceptional people and individuals,” Borelli said. “They are extremely hard-working kids who also do great academically and learn very quickly.”

Borelli also said that when he is recruiting girls who are not from the United States, he not only looks at their overall rankings, but also at the characters of the girls.

Borelli said these personalities help the players to adjust to their new surroundings and to learn to communicate more easily with their American teammates, despite the language differences.

Helena Besovic, a senior from Sarajevo, Bosnia, said the language adjustment was somewhat of a challenge, but being part of the team made her transition a little easier.

“It was hard at the beginning, but over time, I was able to improve because I was always having to talk to my teammates, so that made it better for me,” Besovic said.

Besovic said she had originally been playing tennis in high school in Barcelona, Spain, but wanted to come to America for college. She came to the U.S. when she was 18 years old and attended Ouachita Baptist, a small school in Arkansas. She said she transferred to TCU her junior year because she thought TCU had a better tennis program and she knew Borelli was a good coach.

Besovic said she is glad she made the decision to change schools.

“I like TCU because it’s so small and you get to know people pretty easily,” she said. “The people here are really nice and there are also a lot of friendly professors.”

Though both Besovic and Cetnik enjoy being in America and at TCU, they said they miss their families and countries.

“In my country, people are very close to their families, so it is hard to be away from them,” Cetnik said. “I miss them, but I do talk to them very often.”

Besovic said she is also in frequent communication with her relatives.

“I have gotten used to America, but I still really miss home and my family,” Besovic said. “We send a lot of e-mails, though.”

Despite being homesick at times, Cetnik said she now appreciates the opportunities offered in America.

“I have the opportunity to stay one year after I graduate, so I will be here at least that long for sure,” Cetnik said.