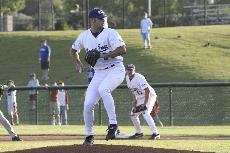 TCU alumni Jake Arrieta was one of 24 men selected to represent the United States on the Team USA baseball team in Beijing. The team earned a bronze medal after Arrieta pitched six innings and allowed no runs on two hits while striking out seven Chinese batters to earn a win in pool play.

Q:How did you get selected for Team USA?

A:The team was picked based on players’ success during the year and their stats.

Q:What is a typical day for a Team USA baseball player?

A:A typical day began with an early breakfast at the Olympic dining hall, followed by sightseeing and shopping at the silk market before our game.

Q:How does it feel to represent baseball for USA?

A:There isn’t a better feeling in the world than the one you get after putting on the USA uniform. Being one of the few players chosen is very special to me.

Q:What is your impression of Beijing and China?

A:I really like Beijing, and my only concern going into the Olympics was the air quality. It turned out the air quality was fine, and it had no affect on any of the athletes. There is so much history in Beijing and so many incredible things to see.

Q:What is the most interesting or exciting thing that happened to you in Bejing?

A:Winning the bronze medal was the most exciting thing that happened to me.

Q:Did you get a chance to watch any of the other sports or meet other athletes? If so, what or who was your favorite?

A:I met a lot of other athletes and also went to several Olympic events. Seeing Michael Phelps win a gold medal and meeting the USA basketball team was really exciting.

Q:Were you at opening ceremonies? If so, what was your impression of it?

A:I’ve never been a part of something as special as the opening ceremonies. Marching through the infield as 100,000 fans chanted USA gave all of us goosebumps.

A:The facilities were the best I’ve ever seen and used.

Q:What was your favorite thing you saw while sightseeing?

A:The Great Wall of China was my favorite sight.

Q:What is the most different part of Chinese culture you found while over there?

A:Local foods and their style of driving.

A:I hate to see such a great sport be dropped from the 2012 Olympics. MLB will have to allow more of its players to join the Olympic team. There is a possibility baseball will be back for the 2016 Olympics.