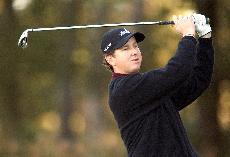 “For whatever reason last year I got off to a real slow start and really had to play well at the end just to kind of keep my playing privileges,” Henry said. “It felt like a wake-up call.”

Henry said that he has dedicated more time to training and getting better.

“I really worked hard last winter to kind of prepare myself for this season and the consistency has definitely been there and paid off,” Henry said. “I haven’t won and obviously it could always be better, but at the same time I saw a lot of signs of some positive stuff.”

The hard work has made a difference this year for Henry. He is shooting a lower scoring average this year than what he was shooting in 2006 when he made the Ryder Cup team.

Henry has made 19 cuts out of the 25 events he has played in. He has had seven top 25 finishes, three top 10 finishes, and was runner-up at Mayakoba Golf Classic at Riviera Maya-Cancun.

Henry said his short game and putting game has gotten better and will continue to work on them along with his driving and wedge game. His main goal when the season is over is to continue to improve.

“I’m 34 years old with already nine years of PGA Tour experience behind me. At the same time, I like to think that my best golf and my playing years are in front of me,” Henry said. “I’ve got to continue to work hard and do the things I need to do to improve and get better, and that’s what I plan on doing.”

Henry is currently ranked 73rd in the FedEx Cup with 672 points and is playing in the Deutsche Bank Championship in Massachusetts this week.

He won the WAC individual golf championship in 1998 and helped TCU win the WAC team title in the same year.