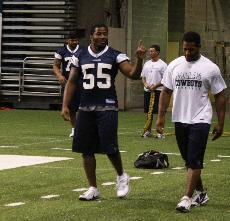 Former TCU safety and Dallas Cowboys 6th-round draft pick Stephen Hodge has yet to see the field in either of the Cowboys preseason games.

The safety turned linebacker underwent knee surgery this summer and was on the physically unable to play list for most of training camp.

Before the Cowboys game against the Oakland Raiders, Cowboys head coach Wade Phillips said he was unaware Hodge had even been activated from the PUP list and said he knew he was not going to play Hodge in the game.

At training camp, Hodge declined to comment to The Skiff.

Jason Phillips, a fifth-round pick of the Baltimore Ravens, has played in both preseason games and has logged three solo tackles in his efforts.

Running back Aaron Brown, picked in the sixth-round by the Detroit Lions, has seen the most playing time, logging 10 carries and averaging 6 yards per carry. He scored one touchdown in the Lion’s first preseason game, in which he celebrated by doing a flip which resulted in an unsportsmanlike conduct penalty, the Detroit News reported.