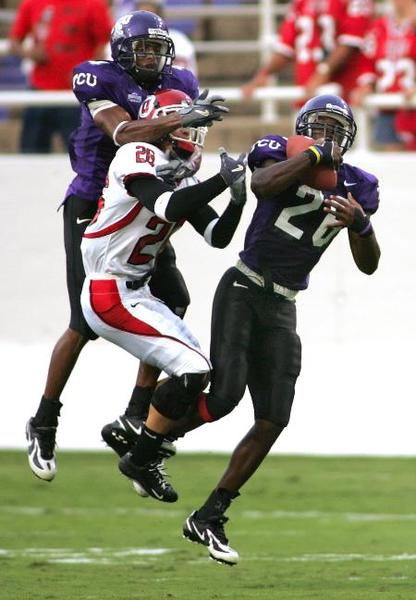 The Dallas Cowboys acquired former TCU safety Marvin White from the Cincinnati Bengals to add depth to an injury-depleted secondary.

“Right now I’m coming to (Dallas) to contribute and help out in any way I’m asked,” White said. “I’m here to help the team win.”

White was taken in the fourth round of the 2007 NFL Draft after finishing his career as a Horned Frog. He started ten games for the Bengals in 2008 and recorded 68 tackles and an interception before a torn ACL and MCL ended his season.

“I’m excited, it’s a great opportunity and I know the area,” White said. “I plan on being more involved with TCU now that I’m right down the road.”

White will be the second Horned Frog on the Cowboys 53-man roster, joining former TCU safety and 2009 NFL sixth-round pick Stephen Hodge on defense. Hodge, who switched to linebacker in the Cowboys 3-4 scheme, was put on the injured reserved list with a knee injury.

White attributed his success in the NFL to how the TCU football program prepared him for the next level of play.

“The coaches gave me the upper hand and let me understand what it would take to get my game to the next level,” White said. “They showed me how to be respectful, how to prepare for game day and how to go practice and work hard every day and give my best effort.”

White plans to play an active role with the current Horned Frogs team by giving the type of support former TCU running back and current San Diego Charger LaDainian Tomlinson provided for the team in preparation for their Poinsettia Bowl victory over Boise State, White said.

“TCU’s a fine program that’s on the rise. The athletes they bring here are great,” White said. “I definitely plan on coming down and talking with the team.”

After transferring to TCU from Kilgore College his junior year, White finished his career with the Horned Frogs with 152 tackles and seven interceptions. His senior year he led the team with 86 tackles and four interceptions.

White became a YouTube sensation after recording what has been dubbed “The Great White Hit” in a 12-3 win over Texas Tech his senior year. White dealt Red Raiders’ receiver Robert Johnson a helmet-removing blow that resulted in Johnson leaving the game due to injury.