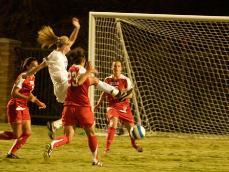 A former TCU soccer player will continue her career with the team, but this time she’ll be off the field instead of on.

“This is so special for me,” Nickens said. “I’ve been here for five years, so to enter the workforce with people I’ve been so comfortable around is a real blessing.”

Abdalla said the hiring of Nickens is a very unique situation for the team considering she just graduated.

“We’ll usually encourage kids to go elsewhere to experience new things,” Abdalla said. “But Angie is such a mature, well organized young woman, so the opportunity to keep her for a little while was something we had to take.”

As director of soccer operations, Abdalla said, Nickens will have her hands full, but the experience will help her in her future.

“She’ll be in charge of daily things regarding traveling, coordinating with the visiting teams and handling video,” Abdalla said. “She’ll get her hands dirty in order to prepare herself for a future in athletic administration and coaching.”

Although she said she is excited about her new position, Nickens said, she was not shocked when she was offered the job.

“Coach Abdalla and I had talked about it last year when deciding if I would be a red shirt or not,” Nickens said. “If it became available while I was at graduate school, then they said they would give me the job, and it did.”

Nickens is currently a graduate student at TCU, majoring in education advancement, but said she hopes to someday have a career in athletic administration. And even though she will be in charge of her former teammates, Abdalla said, there should not be any problems.

“She’s a mature kid who will keep the balance between being a player and being a part of this administration,” Abdalla said.

Nickens closed out her career on the roster this fall as a midfielder for the Frogs. She started every game of the season and had the most playing time on the team, with 1758 minutes. She made 11 goals on the season, including the game-winner against conference rival University of New Mexico.

The only problem with hiring Nickens is the fear that TCU won’t be able to keep her on staff for long, Abdalla said. He said he’s already received calls from other schools inquiring about Nickens.

“As long as we can keep her around we’ll be happy,” Abdalla said. “She’s a kid with a very bright future in college athletics, and we’re very pleased she decided to start her career with us.”