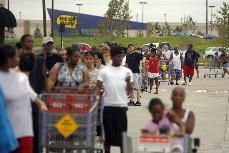 She was one of the lucky ones.

Besides a few downed trees and flooding in her backyard, Laura Davidson, a junior nursing major from Seabrook, has a house to go back to.

After mandatory evacuations were announced, Davidson’s parents rode out the storm with family in the Deer Park area, about 20 miles southeast of Houston.

“All of the destruction hit really close to home because it was areas that I drive down everyday when I go home,” Davidson said. “I wasn’t worried necessarily about my house as much as my family getting out OK.”

Chancellor Victor Boschini said professors are being encouraged to work with students from affected areas if they are having difficulties. Staff at the health and counseling centers are aware this will be a stressful time for students from the areas hit by the hurricane, Boschini added.

The city is prepared to keep those shelters open “as long as it takes,” Jacobs said.

“It’s a tough time because they want to go home, and there is uncertainty as to the condition of their home,” Jacobs said.

Evacuees are advised not to leave the shelters because many of the affected areas are still closed to the public, Jacobs added.

Fort Worth isn’t just helping victims of the hurricane locally.

On Sunday, Fort Worth officials sent a convoy of 33 vehicles and 47 city employees to Houston to help with cleanup efforts, Jacobs said. The team, which started work Monday, will stay in Houston for about a week.

“You could hear the wind howling all night long,” said Sylvia Garcia, a junior English major at the University of Houston.

Garcia rode out the storm with family in the Houston Heights community, located near downtown Houston.

The wind was the worst part of the storm, Garcia said.

“When there was a particularly strong gust of wind, the house would shake,” she said.

All the aforementioned universities, with the exception of Texas A&M University at Galveston, have since resumed classes.

TAMUG officials had “limited access” to parts of the campus Sunday, according to a statement issued on the university’s Web site Sunday evening.

The university will remain closed this week, and university officials have started implementing a contingency plan that involves students continuing the fall semester at Texas A&M University in College Station, according to the TAMUG Web site. University officials are working to have plans finalized by Wednesday, the statement said.

Schools such as SFA and UT Tyler have given aid and shelter to those affected by the hurricane.

The loss of trees was the main damage on the SFA campus, Luna said.

Beverley Golden, director of news and information for UT Tyler, said the university, which sustained “minimal damages,” according to preliminary reports, has sent several students and faculty to local shelters to help out.

“It’s one of those times that I’m really proud of human beings because it brings out the best in people,” Klotz said.