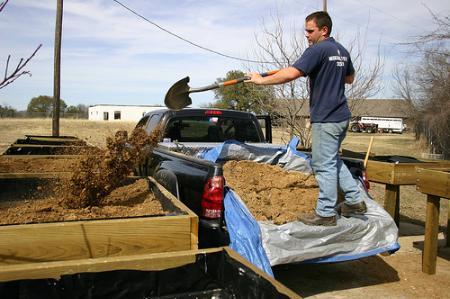 In the concrete cities of the Dallas/Fort Worth Metroplex, there’s no escaping the heat without increasing energy costs. But environmental scientists in Fort Worth are looking to beat the heat and a number of other pollutants plaguing urban environments – one “green roof” at a time.

On April 11, the University of Texas at Arlington installed 1,000 square feet of soil and plants to the roof of the Life Science Building. This summer, the Botanical Research Institute of Texas will continue making plans to install what its director of development, Cleve Lancaster, says will be “one of the largest examples of green roof in North Texas” at BRIT’s future headquarters next to the Fort Worth Botanic Garden.

“TCU is collaborating with us on research to determine plants that will survive in North Texas environments and the system that can be used to best support those plants,” Lancaster said.

Growing plants in soil on roofs for insulation, storm-water runoff storage, and water and air purification is nothing new to Europe. In fact, King Nebuchadnezzar II’s Hanging Gardens of Babylon, one of the Seven Wonders of the Ancient World, though rumored to be a gift for Nebuchadnezzar’s homesick wife, Amyitis, is often credited by scientists as being the first green-roof system on record.

In the U.S., the number of green-roof projects varies from state to state. According to the Greenroof Projects Database, New York has 56 green roofs and Oregon contains 25, while Oklahoma and Mississippi have none. As of the end of April, the database lists Texas as having seven green roofs, but the number is rising.

TCU environmental science professor Tony Burgess said he is guiding graduate-thesis research by Jon Kinder and David Williams that will contribute to BRIT’s green-roof project. Kinder and Williams are leading a team of about eight graduate students in a partnership program designed to test plant life in Fort Worth’s prairie barrens, Burgess said.

Because most green-roof research has been done in Germany and the northern United States, it is less applicable in Texas because of climate differences, Williams said.

“We went out into the field and looked at some really shallow plain communities that already exist, because on a green roof, generally, you don’t get to put more than 2 feet of soil,” Williams said. “Generally what you get is 4 inches, so it’s very shallow.”

To effectively insulate buildings in Texas, scientists are looking for a soil that stays moist for long periods, Williams said.

“Part of the reason green roofs keep the temperature down is from just the total amount of water being actually able to be in the soil,” Kinder said. “What happens is when the sun hits the roof, it hits the soil and it evaporates out of the soil. And when the plants are constantly pulling up the water through the roots system, it actually has a cooling effect.”