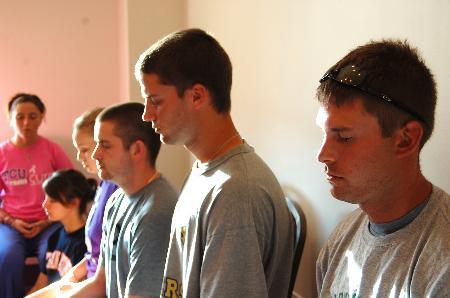 Sitting in the garden of his family home in West Fort Worth with the sunlight shining on his light brown hair, he is not what one might expect when going to meet a Buddhist monk.

But John Freese is just that.

A Fort Worth native who now lives in India nine months of the year, Freese is hosting Tuesday evening meditation sessions on campus throughout October and is planning a half-day retreat and picnic during Fall Break.

Adam Gamwell, program coordinator for religious and spiritual life, said the program has been well-received on campus.

“We have a core group of several students that come every week, and then we have a few newcomers who come just to check it out,” Gamwell said. “I think it’s great because it shows that TCU cares about educating the whole person, not just their intellectual side.”

Akshay Kakar, a second-year international student from India, attended the session as part of an outside assignment for his world religions class.

“I had meditated before, but this was the first time I practiced meditation while being in motion,” he said. “I thought it was very important to be still in order to calm the mind, so it was really interesting to find peace while walking slowly in a circle.”

Freese said he began his journey into Buddhism at a campus session just like these. As a film major at Vassar College in New York, he came across a flier for a meditation group. He went, he liked it and it started him on a path to enlightenment that more than a decade later, he still follows.

“The first time I meditated nothing really spectacular happened, but I did come away from it with a sense of peace and well-being that made me believe there was something to it,” Freese said.

He began attending monthly sessions at Zen Mountain Monastery near the college and doing a daily meditation in his dorm room.

After college he moved to Austin and while attending a series of Thich Nhat Hanh retreats on the East Coast, he was inspired to go a step further. He moved into a monastery in France and made the commitment to devote his life to Buddhist principles.

This includes, Freese said, a respect and compassion for all living things and a constant quest to gain a deeper understanding of the true nature of the human spirit. Monks are also required to abstain from certain behaviors they believe can cause delusion and hamper spiritual awakening. Buddhist teachings forbid the taking of life, stealing, having sexual relations, using false or harmful speech and using intoxicants.

“Being celibate is the hardest one for me because I sometimes experience sexual desire and loneliness,” Freese said. “The point of being celibate though is to let go of the desire and open up to a deeper experience of peace and happiness.”

After completing the necessary training, Freese became a monk within the Thich Nhat Hanh monastery where he continued to live and train for six years. While there he began reading the teachings of an Indian Guru named Ramana Maharshi and was so inspired by the message that he moved to the Indian city of Thiruvannamalai, a mecca for spiritual seekers from around the world.

“There is a mountain there called the Arunachala, it puts out a lot of spiritual energy and people come from all over just to be near it,” he said.

Freese said immediately after moving to India he was overwhelmed by what seemed like the chaos of the place, but he now feels more at home in India than he does in Fort Worth.

“It’s a lot different over there,” he said. “It is not as materialistic a society as it is here. The people and the atmosphere are more spiritual.”

He returns to Fort Worth for three months each year, where he hosts meditation sessions and retreats at area yoga centers and now at TCU.

Freese said that meditation takes time to learn and get used to but that it can bring about deep healing and transformation for the body and mind.

What: Half-day retreat and bring-your-own-food picnic