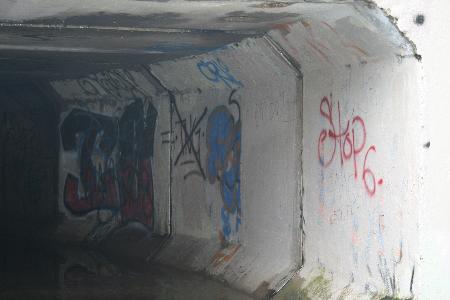 A Fort Worth gangbanger pops his trunk, pitches a pudgy plastic bag packed with white powder onto the pavement and signals for the buyer in the adjacent vehicle.

The banger throws the narcotic into the trunk, jumps into a four-door sedan and rivals fire as the vehicle peels out.

Drug trafficking is just one of the issues associated with gang violence.

Although the gang population is still growing, Fort Worth police are cracking down on gang-related crime, which is on the decline from last year, said Lt. David Burgess of the Fort Worth Police Department, a former officer of the department’s Gang Intelligence Unit.

See video from an interview with Lt. David Burgess

Gang-related robberies, graffiti and possession of a controlled substance are up 96, 56 and 22 percent, respectively, from January to September 2006 to the same time period in 2007, according to statistics from the gang unit.

However, murders have fallen 28 percent, aggravated assaults are down 11 percent and auto theft has decreased by 22 percent, according to the statistics.

Sabir said more than 11,000 gangs – half of which are still active – have been documented in Fort Worth since 1983. Still, he said, that doesn’t include the unidentified gangs “flying under the radar.”

Burgess said the number of gangs is slightly increasing.

“But you’ve got to realize that the city of Fort Worth is growing,” he said. “As you get more and more people, you’re going to have more and more problems – that’s just the nature of the beast.”

Cracking down on gang crime

Northcide Four Trey Gangsta Crips in Northside is a violent gang notorious for drug trafficking, Burgess said. And because Burgess was already under mandate from the chief of police to take action, they filed a civil lawsuit against the Four Treys – running seven simultaneous search warrants using the FBI and Texas State Troopers, he said.

The city asked for injunctive relief against the gang to put an end to public nuisance, specifying 10 or 11 gang members, and served those members with papers, requiring them to make an appearance in court, but did not sue for money damages, Burgess said.

Burgess said the injunctive relief allows the city to specify a certain geographic area, called a safety zone, where members of the gang cannot use cell phones, hang out with other documented gang members or loiter past curfew, for example.

If any of the gang members within the injunction area violate the injunction, which outlines 26 items, they will be arrested on a Class A misdemeanor, Burgess said.

The Six City Comprehensive Anti-Gang Program is part of a $30 million Anti-Gang Initiative to provide gang prevention and enforcement, according to a U.S. Department of Justice news release.

Fort Worth was chosen as one of six cities with significant gang-related problems to receive the $2.5 million grant for prevention, enforcement and re-entry.

Burgess said Fort Worth police are concentrating their efforts on Northside as the grant specifies.

“What that does is put more resources on the street on any given night so that we can spread our resources throughout the city,” he said. “We have enforcement teams out every night, and they can only handle so much. When you have the availability to put an additional six or eight more gang officers out on the street, then you’ve almost doubled what you have on the streets.”

During a ride-in with the Fort Worth Gang Unit, I sat with Burgess and watched eight gang unit officers in bulky bulletproof vests filed into a stick formation as they jump out of an unmarked retro van and throw open the torn screen door with steel bars of a crack house in the 1000 block of Lowden Street. Another officer shattered a window in the back of the house with a steel baseball bat as a distraction.

A team of gang unit and narcotics officers raided the duplex, handcuffed 12 people, confiscated a crack pipe and three grams of cocaine, and arrested two on suspicion of possession of a controlled substance on Oct. 20, 2007.

Burgess said the Fort Worth Police Department has the largest gang unit in Texas and is taking a zero-tolerance approach to any offenses gang members commit. If gang members are caught driving without a driver’s license or insurance, the police will cash bond the gang members on their traffic citations, put them in jail, tow the car and put a hold on it for gang detectives, he said.

Capt. Bill Read of the Fort Worth Police Department’s north division said Fort Worth police have made graffiti cleanup a priority.

“That’s how the gangs spread their messages and spread their threats,” he said. “If you can block that forum – as soon as you clean off the graffiti they can’t communicate – they can’t send threats to their gangs.”

Intervention programs, such as the Comin’ Up program, sponsored by The Boys & Girls Club of Greater Fort Worth, are stationed in the areas with the highest concentration of gang membership and violence, Burgess said.

The Comin’ Up program was established in 1994 when Fort Worth was experiencing significant gang violence, said Daphne Barlow, president of the Boys and Girls Club of Greater Fort Worth. The nine sites in Fort Worth offer life skills programs, back-to-school programs and job training and placement programs for gang members between the ages of 13 and 24, she said.

David Waters, the program coordinator for more than two years, helps put kids back in school, get them job training and put them through a semester of college.

“The problem is, with the definition of gangs, obviously we’ve got to have better training for police officers and more awareness of all the variations in how kids hang out together so we don’t have that mistake of over-generalizing about who is in a gang,” he said.

Read Ferrell’s view on the definition of gang members

Sabir said the community as a whole needs to be more involved.