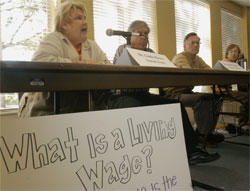 At TCU’s Living Wage Movement forum Wednesday, panelists said starting wages at TCU should be raised to the living wage, but did not say where the money for the increase would come from.The panel included professors from four fields: social work, political science, religion and management. Stephanie Sherwood, a junior social work major and president of the Living Wage Movement, led the discussion.

The Universal Living Wage web site defines the living wage as the amount of money a person must make to spend no more than 30 percent of his or her total income on housing. The living wage varies because the fair market rent is not the same in all areas.

Stuart Youngblood, a management professor, said the panel’s goal is to educate people on the living wage issue. Though TCU tuition is currently at market value, the tuition might need to be raised, Youngblood said.

By e-mail, Chancellor Victor Boschini said he has heard about the Living Wage Movement and has appointed the University Compensation Advisory Committee to study the living wage and other issues related to wage compensation and benefits at TCU.

Boschini said any compensation increase would be paid for out of the operating budget, which includes tuition dollars, grants and gifts.

“All organizations look at the market and set a wage that would attract people,” Youngblood said.

Youngblood did not explain the effect of paying living wages on the market value for a job.

Youngblood said some problems would need to be discussed before a change in wages is made, such as the effect a raise in wages would have on job wages above the living wage.

If wages are raised for one job, then people in higher jobs are going to address the fairness of the raise in wages, Youngblood said.

“If we were to change the wages of our lowest paid workers, we would still have to address the fairness issue,” Youngblood said, “because other people are going to compare their wages to the floor, and they’re going to ask why (they) don’t get more relative to that job.”

Linda Moore, a professor and chair of the department of social work, said the starting pay for housekeepers at TCU is $8 an hour. The living wage is at least $8.50 an hour.

Moore discussed the effects on families who do not make the living wage.

“Families are not strengthened when parents have to work two or three jobs each,” Moore said.

Those who make less than $9 an hour would make $5.75 an hour after health care costs are subtracted, Sherwood said.

Morals and religion were cited by some of the panelists as a reason to have living wages at TCU.

“It is immoral for a Christian organization to not pay a living wage,” Jackson said.

“We have to put human beings at the center of economic decisions,” Camp said.