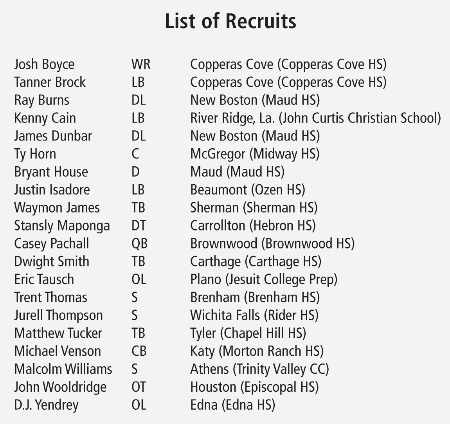 The university announced the recruitment of 20 new Frogs at the National Signing Day press conference Wednesday.

“One of the things I am most impressed with is the kind of people they are,” head football coach Gary Patterson said.

Overall, the Frogs landed the No. 46-ranked recruiting class according to Rivals.com, two spots behind Mountain West Conference rival University of Utah.

“Everybody has paper tigers, but the key to it is how you develop them,” Patterson said. “We have been getting ‘C’ grades on Signing Day forever and try to turn them into ‘A’s. Now we’ve got a class that is a ‘B’ or ‘A’ class, and we are tying to not let them turn into ‘C’s or ‘D’s.”

Of the players who signed national letters of intent were four defensive linemen, four offensive linemen, three linebackers, three tailbacks, three safeties, one quarterback, one wide receiver and one cornerback. But despite the variety of positions, Patterson said a lot of these players have something in common.

“Out of these 20 kids, 10 of them have been tailbacks or carried the football at some point in time in their career,” Patterson said. “Some of those guys who were tailbacks are on the offensive and defensive line. It’s quite a group.”

The three full-time tailbacks are Waymon James, of Sherman, Matthew Tucker, of Tyler, and Dwight Smith, of Carthage.

“We feel like it is as good of a tailback group as we have ever recruited,” Patterson said.

Josh Boyce, a wide receiver, is another player to join the Frogs, Patterson said.

According to ESPN, Boyce, of Copperas Cove, is the highest-rated recruit for TCU, earning a grade of 80 out of 100.

Casey Pachall is also one of the four-star recruits in this year’s class.

Pachall is ranked as the No. 9 dual-threat quarterback in the nation according to Rivals.com.

Patterson said the leading man out of the four offensive line recruits is Ty Horn, a center out of McGregor, and is the No. 78 player in the state according to Rivals.com.

The future at linebacker for the Frogs comes from the group of Tanner Brock, of Copperas Cove; Kenny Cain, of River Ridge, La.; and Justin Isadore, of Beaumont.

Cain is the only recruit from outside of Texas and was a member of the New Orleans Times-Picayune’s Top-25 Blue Chip list. Isadore is rated as the 27th-best inside linebacker in the country.

Patterson said safety Malcom Williams, of Athens, is the top recruit out of the secondary after recording five interceptions, including two returned for touchdowns, as a sophomore at Trinity Valley Community College.

Joining him in the secondary will be safeties Trent Thomas, of Brenham; Jurell Thompson, of Wichita Falls; and cornerback Michael Venson, of Katy.

Thompson is ranked No. 19 in the nation among safeties. Rivals.com also ranked Thompson as the fifth-fastest safety in the nation.

Patterson compared the job he has in front of him with these 20 recruits to the job of a baker.