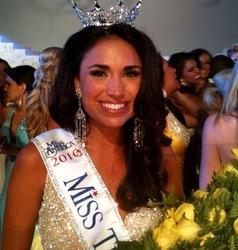 After finishing first and second in July’s 2010 Miss Texas pageant, two students now have more in common than a shared address.

Senior broadcast journalism major Ashley Melnick, who won the pageant, and senior business major Jordan Johannsen, who took second place, shared the stage on the final night of the 75th Miss Texas pageant celebration, held at the University of Texas at Arlington.

Melnick said being one of the last two contestants with Johannsen was a “neat” experience to share.

“I knew at that point, regardless of what happened, we were proud of each other and we loved each other,” Melnick said. “The last thing I told Jordan was that I knew this was going to happen because we had prepared together and pretty much motivated each other for the whole year.”

Melnick said she participated in the Miss Texas competition three times before winning it.

Although participants are allowed to compete in the national Miss America competition only once, according to the Miss Texas website, they can compete at the local and state levels multiple times.

Prior to her senior year of high school, Melnick had never competed in pageants, she said.

“I had auditioned for American Idol and they stopped me in the middle of my song and asked if I had ever participated in pageants before,” Melnick said. “They said I was too much like a pageant (contestant).”

Johannsen said she has competed in pageants for five years and plans to continue, working up to another Miss Texas competition. She said participating in pageants has not only helped her gain self-confidence, but also a best friend. Her platform, the Starfish Society, helped her get involved in the community, too, Johannsen said.

Melnick said that as Miss Texas, she is scheduled to make appearances in Texas schools promoting her platform, The Voice of Autism. She said her brother, who is autistic, was part of the reason she chose to help raise awareness about the organization.

“I will be in the schools talking about hot topic issues, especially when October hits,” Melnick said.

In addition to her platform, Melnick said she plans to speak about drug and alcohol awareness during the school visits.

“Being able to speak (to) and experience people is really a growing process having this title,” she said. “I have seen a difference in myself8212; I’m more comfortable speaking and being around people.”

Melnick said her speaking engagements would prepare her to compete in the 90th annual Miss America competition in Las Vegas Jan. 15.

John Tisdale, associate director of the Schieffer School of Journalism where Melnick was enrolled as a student, said he was proud of her achievements.

Seward, the youngest competitor to reach the top-ten at age 18, said she was honored to advance so far, considering her age.

After finishing in the top-five, Morris said she plans to use the money she won in the competition to continue her education.

Melnick said she would take a year off from her schooling to fulfill her duties as winner and plans to graduate the following year with a bachelor’s degree in broadcast journalism.