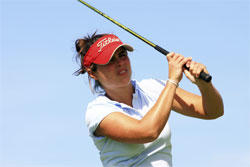 In Mountain West Conference women’s golf, February was the month of Valentine.And no, the MWC wasn’t giving heart-shaped cards to all the women’s golfers, but they did give the Golfer of the Month Award to TCU freshman Valentine Derrey.

The field included 10 of the top-50 players in the country including the nation’s top-ranked player, Georgia’s Taylor Leon, who Derrey beat by two strokes.

Derry finished the first round of the tournament two shots ahead of the entire field, shooting a 5-under-par 67. She took just 32 strokes to complete the back nine that day, tying a TCU record set by former All-American Brooke Tull in 2004.

The last time a TCU freshman won a tournament was when Angela Stanford won the Texas A&M Monica Walsh Memorial Tournament a decade ago.

According to the Rolex Women’s World Golf Rankings, Stanford is now ranked No. 66 on the Ladies Professional Golf tour, coincidental to Derrey’s current No. 66 ranking by Golfstat.

Derrey’s golf game is characterized by her ability to hit the ball long and straight, said senior Camille Blackberry, teammate of Derrey.

“She hits it hard and straight every time,” Blackerby said. “That’s extremely important on harder courses that are tough to navigate.”

Head coach Angie Ravaioli-Larkin said that in addition to her great ball striking ability, Derrey’s best attribute on the course is her intensity.

“It’s the intangibles. Her intensity and focus probably make her better than anything else,” Ravaioli-Larkin said. “I very rarely find someone that is as intense as I am out there, but she gives me a run for my money.”

Chipping is what she needs to work on, Ravaioli-Larkin said.

“My long game and my putting are where I can save strokes,” Derrey said. “I need more accuracy when I am chipping.”

Derrey said she would like to pursue a professional golf career but doesn’t know if she will be able to.

Ravaioli-Larkin said there is no doubt in her mind that Derrey could play professionally.

“It’s not a question of whether or not she can do it,” Ravaioli-Larkin said. “It’s a matter of when.”

“Valentine definitely has the potential to play in the LPGA,” Blackerby said. “She’s got the drive, determination and focus that it takes to compete at that level.”

Ravaioli-Larkin said she knew Derrey was a world class player when she came to TCU, but that she was surprised at how quickly she adjusted to playing at the college level and being in a different culture.

Derrey lived in Caracas, Venezuela for five years before moving to Paris in 1993.

“International players have so much more to deal with,” Ravaioli-Larkin said. “Adjusting to college is hard enough with studying and practicing, but she also had to adjust to a whole new culture.”

Derrey said she hasn’t had any problems adapting to her new life in Fort Worth, and her teammates said they are impressed with the progress she’s made.

“Language was probably her biggest barrier at first,” Blackerby said. “Her English has improved so much since we first met. She picked it up so fast I don’t think it will be a problem.”

She’s also no stranger to success.

Before coming to TCU, Derrey won the 2005 Junior French Championship for players under 18. She was a runner-up at the 2004 and 2005 French Team Championships as well as at the 2005 Duke of York Tournament. She finished second at the 2004 British Girls Open Amateur Championship and has been a part of French National teams since 2001.

Derrey has been playing golf since she was eight. She grew up golfing with her parents and siblings.

The future of the women’s golf program at TCU looks promising. Not only have they gotten off to a solid start this season, but the play from their freshman has been outstanding.

Thanks to their fourth-place finish in their first match at the Central District Invitational in Parrish, Fla., their sixth-place finish in Puerto Rico, second-place finishes at the SunTrust Lady Gator Invite and the Betsy Rawls Longhorn Invitational, the team is currently ranked No. 27 in the nation according to the latest Golfstat poll.

Keep your eye on TCU women’s golf this season. With the impact that Derrey has made on the team so far this season, they should be a powerhouse in the MWC.