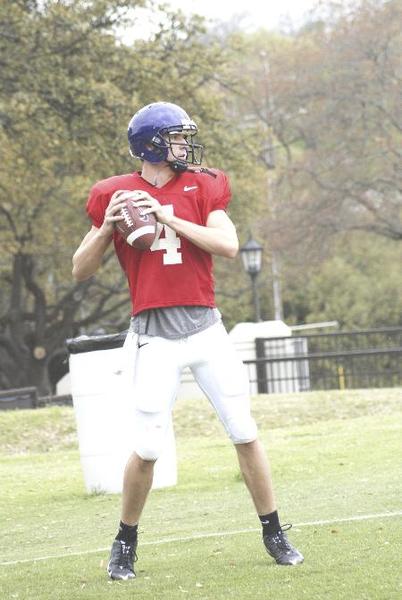 When Casey Pachall arrived on campus on a cold January day, he found himself assigned to Brachman Hall, far from the suite life his new teammates were living in Moncrief Hall.

Casey’s parents, Stan and Debbie Pachall, helped their youngest son unload containers from his hand-me-down Dodge Ram and haul them up to his temporary third-floor room. Sister Christie and brother Chad lent hands while 3-year-old Clint, Christie’s son, joined to say goodbye to his uncle, known to him as “Casey Football.”

“To me, a lot of people don’t get to live their passion, and he’s getting to,” Debbie Pachall said.

The 6-foot-4-inch quarterback lived out of his containers until the first day of classes, when he made the move to Moncrief, making the first day of college classes even more hectic, particularly when he didn’t choose his classes until 1 p.m.

Pachall graduated from Brownwood High School in December and his final grades went in Dec. 19. But because the high school was out for Christmas break, none of his necessary paperwork, such as his high school transcript and proof of graduation, could be filed with the NCAA Clearinghouse until just days before his arrival on campus. He was unable to register at the university until the paperwork was in.

“It’s different,” Pachall said. “It’s actually like going back into high school again because you’re new on campus. Nobody knows who you are and you’ve got to make a name for yourself again.”

Pachall is a centerpiece in head coach Gary Patterson’s 2009 recruiting class. Rated by Rivals.com as a four out of five star recruit, Pachall brings a strong arm and athleticism to the quarterback position.

As a three-year letterman at Brownwood, Pachall threw a total of 51 touchdowns and added 27 on the ground. He was rated the nation’s No. 9 dual-threat quarterback in this year’s class, with his ability to make tough throws and run a 4.65-second 40-yard dash time while carrying the ball gracefully past defenders with his long, lanky legs.

But while most of the country’s high-profile 2009 signees spent national signing day simply inking their letters of intent, Pachall spent his Feb. 4 in class and working out with his new team.

Pachall knew early in the recruiting process that he wanted to graduate early to get ahead in college. He took a dual credit English class the summer before his senior year and had a full load of classes in the fall to get the necessary credits to graduate early.

“This is probably where he needs to be because he wants to be at that next level himself,” his mother said. “I see it as him just preparing himself. He wants to be prepared for whatever comes up, whether it be him sitting as a redshirt his freshman year or having to step in and play.”

Pachall decided after a visit to campus in March 2008, his junior year, that TCU was the place for him.

“Pretty much the whole ride back, I was thinking to myself, this is the place I felt like I needed to go,” Pachall said. “Then the next week I made that call to Coach P about becoming a Horned Frog.”

Debbie Pachall said that his choice of the university was an answered prayer, with programs such as Florida and Notre Dame also offering her son a scholarship.

“We’re so grateful that he picked TCU, not just because it’s closer, but because we think it’s a perfect fit for him and for what he wants in life,” she said.

When Pachall decided to graduate early, his mother drilled him with questions about missing his last semester, but he wanted to play football.

Debbie Pachall said her son isn’t one to make risky decisions and compliments his ability to surround himself with good friends and stay out of trouble. Pachall attributes his decision-making skills to growing up as the son of a state trooper.

“You have to have the capability to do what’s right to be able to perform at any level with any expectation,” he said.

Pachall’s decision to enroll early is most indicative of his strong work ethic. Even after graduating from Brownwood, Pachall spent time at the school’s workout facilities over Christmas break running and lifting weights.

His work in the weight room has changed substantially since arriving on campus. Coaches have introduced him to exercises that leave him wondering where they learned this stuff, he said.

But he doesn’t question their methods. In just over a month in the program, Pachall said he’s added four pounds of muscle to his tall frame. In four years at Brownwood, he said, he only gained 10 pounds.

Like most other college students, Pachall is enjoying his newfound freedom in his first semester, but he has noticed the difference between college and high school classes.

“It’s completely different than high school because in high school, back in Brownwood, you didn’t really have to do much work and you’re going to pass easily,” Pachall said. “Here, you have to do every little bit of work and extra.”

Currently, he’s taking a full load of classes in his first semester with a 15-hour schedule.

Yet even now as a college freshman, there is one thing Pachall still misses about his small hometown.

Pachall remembers the last time he donned the maroon and white of the tradition-rich Brownwood Lions.

On the road against Snyder, Pachall and company needed a win to force a three-way tie for the district’s final playoff spot. A coin flip would then decide the teams’ playoff future, a story straight out of the pages of Friday Night Lights.

“It felt like a bad situation,” Pachall said. “It’s not one of those games you want to be playing in that will decide your playoff fate, but we had to do it.”

Pachall, at the helm of the best 3A offense in Texas, ran for three touchdowns and threw for two more. But it wasn’t enough as the team’s defensive woes led to a 56-49 loss.

Even while at Brownwood, he knew his run would end eventually, and he was prepared to take the next step. He has no doubt he’s where he needs to be to live out his passion.

“When I wake up every morning, if I start to question myself, I know I’m here for a reason and I need to be here,” Pachall said. “If I’m not here, then that’s giving someone else time to get a head start on me.”