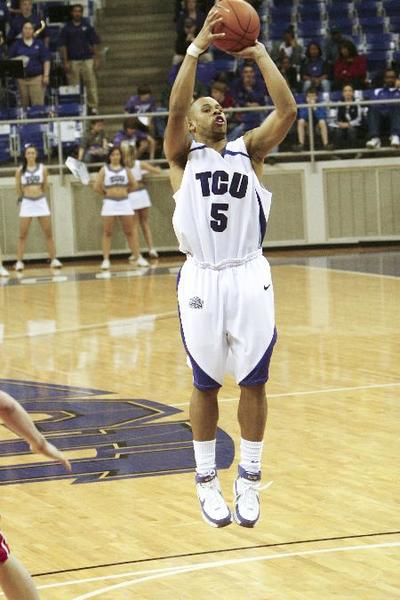 Two months ago, TCU freshman basketball player Ronnie Moss entered a game against UNLV just three and a half minutes into the contest. Almost immediately the team changed. Players picked up the pace, fought for loose balls and methodically wove their way to an 80-73 win as the final buzzer sounded.

Other players contributed to the win, but it was Moss’ tenacity and effort that lit a fire under the Horned Frogs that game.

That night, Moss lived up to the nickname he earned as a newborn – Tuffy.

He was born with a congenital cardiovascular defect, an ailment that affects about eight out every 1,000 newborns. As he and his mother like to put it, he was born with a “hole in his heart.”

He was delivered at a healthy weight on his scheduled due-date, Sept. 11, 1988. But as soon as Moss entered this world, it was clear that something wasn’t right. He couldn’t breathe on his own. Heart and lung problems were immediately identified.

Doctors quickly attached him to an incubator to help his underdeveloped lungs. Moss’ mother, Michelle Douglas, decided against putting her weakened newborn through the stress and risk of heart surgery.

Instead, she opted to slowly wean Moss off of the oxygen assistance and hoped his troubled heart would find a way of healing on its own.

Douglas was rarely able to see her ailing son because of a traumatic delivery. She relied on nurses, doctors and family members to keep her informed of his worsening status as doctors cut down the amount of oxygen Moss received each day.

One family member, Douglas’ brother Charles, would come to the hospital every day after high school to sit with Moss, who was in an incubator, and relay information to his sister, who was resting and recovering – not to mention worrying – in a room on a floor above the nursery.

“Don’t worry, Sis, he’s going to be OK,” Charles Douglas told his sister. An onslaught of needles pressed into his frail body and tubes forced down his tiny airway seemed to have little effect on Moss. He never cried.

The day eventually came when it was time for Moss’ mother to make a final decision about what to do with her son. She decided to take him off of the oxygen assistance completely – he would become dependent on the oxygen if he was not forced to breathe on his own. Now he would have to live without the machines that had nurtured him through such rough and hopeless days.

She described the scene in the hospital as chaotic as soon as the oxygen was no longer being used to support her son’s breathing.

“He started gasping for air,” she remembers.

The scene was too much for her brother. She remembers him breaking down and crying.

“No, no, no,” Michelle Douglas recalls her brother pleading. “I don’t care what the doctors say, he’s going to make it, he’s going to be able to breathe on his own. He’s my little Tuffy, my little tough guy.”

He’s been Tuffy ever since. Even his mother uses the name.

Doctors comforted the crying mother, telling her Moss’ gasps could be a good sign. He was fighting to survive – refusing to die.

Moss’ skin, starving for oxygen, turned purple. But slowly, as if awakened from a nightmare, he started to regain color.

“He started balancing out a little bit,” his thankful mother remembers.

His breathing was still unstable, so doctors decided to keep him in the hospital until it was determined he could leave safely. But miraculously, he was getting better. After they had decided Moss had made enough progress, doctors sent him home. But his fight wasn’t quite finished.

About two hours into Moss’ very first day at home, he suddenly stopped breathing. The purple skin returned. He was stiff and cold. Life was trying to escape from him once again.

“At that point I just thought, ‘OK, he’s gone,'” Michelle Douglas said. “I know that if you don’t have enough oxygen within a certain time that more than likely it’s going to be bad news.”

But the firefighter immediately went to work on the small, lifeless and now colorless baby. He managed to open Moss’ airway using a procedure he knew thanks to his job. Once again, color started to return to the baby’s skin.

Moss seemed to finally be in the clear, but doctors told his mother that the chances were high that her son had suffered brain damage in the incident. She prepared for the worst.

“I was going to love him and take care of him however the outcome would be,” she remembers thinking.


Doctors insisted he would be slower than the other children and that sports would almost certainly be out of the question. But despite the doctors’ predictions, Moss’ toughness, as it already had so often, quickly showed.

Michelle Douglas said that although Moss was always surrounded by sports, she was too afraid of letting him participate. She wasn’t sure his heart would hold up. His grandfather had a Pee Wee football team in Fort Worth, and one day he took Moss, who was about 4 years old, to a game to watch from the sidelines.

During the course of the game, one boy from his grandfather’s team was making a break for the end zone, running free down the field. All of a sudden, a boy caught up to the touchdown-bound player and tackled him from behind. But this wasn’t a player from the other team – it was Tuffy.

The incident was an eye-opener for his mother. Perhaps the doctors had been wrong.

“He may be able to do other things,” Michelle Douglas began to think at the time.

With the consent of doctors, she started gradually letting her son play sports. Being active actually helped Moss. His heart began to strengthen and fully heal. He passed every physical doctors gave him. He was pretty good at sports, too.

Moss’ first memory of playing basketball is when his mother, who played in high school and college, was teaching him how to shoot. His mother would go on to be his coach through much of his childhood. She even coached his youth teams.

Basketball quickly became Moss’ life. His years were filled with playing on various teams around the area. He played three years of high school ball at North Crowley High School in Fort Worth before heading to Bridgton Academy, a college preparatory school in Maine. Before coming to the university, he attended Christian Life Academy in Houston, where he continued to play and earned a ranking as the 12th-best player in Texas according to TexasHoops.com.

Head basketball coach Jim Christian found Moss while he was coaching at Kent State in Ohio. Christian told him he was looking for a strong, left-handed guard like Moss. Moss eventually signed with Kent State. But when Christian was hired at TCU, Moss was granted a release and followed the coach back to Fort Worth – and his mother.

“I signed up to play for coach Christian and not anybody else,” Moss explained after a recent practice. “I was going to stick to my commitment with him.”

Today, Moss is the fourth-leading scorer on a team that is trying to find a new direction under Christian. His early struggles in life are now a distant memory. But his toughness still shines through. It isn’t difficult to detect.

On the court he’s easy to spot – he makes things happen when he has the ball in his hands. And of course, one thing hasn’t changed since he was an infant: Tuffy’s tough.