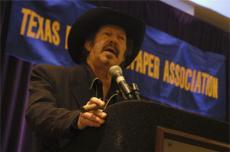 Garbed in black and waving his ever-present cigar, independent gubernatorial candidate Kinky Friedman peppered publishers of Texas’ largest newspapers in downtown Fort Worth on Tuesday with his campaign-related one-liners.In a question-and-answer forum hosted by the Texas Daily Newspaper Association titled “How Hard Could it Be” – one of the Friedman campaign’s primary slogans – Friedman entertained publishers using humorous anecdotes and quipped strategically about his three main platform issues: education, legalized gambling and border control.

“We’re falling behind in public education ranks,” Friedman said. “We need to reverse that trend.”

The education budget is the big concern, Friedman said, and legalized gambling can assist in increasing it.

Legalizing gambling is essential in Texas, Friedman said, who joked about the absurdity of its absence.

“The place that invented Texas Hold ‘Em cannot even play it,” Friedman said.

Shifting toward the question of border control, Friedman outlined his tentative Five Mexican Generals Plan. The plan calls for financial incentives to the Mexican government to patrol the border for illegal immigrants and drugs slipping into the United States.

Through this plan, money would be placed in the bank accounts of five Mexican generals all overlooking a certain zone on the border of Mexico and the United States, Friedman said. As illegal immigrants are caught or drug rings are discovered by U.S. officials, money will be taken from the offending zone’s general’s account.

“Something has to be done,” Friedman said, turning more serious. “Nothing has worked so far.”

Friedman may be tackling difficult issues, but the question remains whether voters see him as a serious candidate.

Political science chairman James Riddlesperger said that while there are four main candidates running for governor, he thinks the incumbent Rick Perry should have a baseline 30 percent of the vote, a tough obstacle to overcome considering Friedman is still trying to get the necessary 45,000 signatures to get his name on the ballot.

Although the Friedman campaign is not releasing the actual figures for the petition, it is on track to even surpass the minimum count, campaign spokeswoman Laura Stromberg said.

“We have always planned on exceeding the requirement,” Stromberg said. “We want to have extras in case the state invalidates a number of our signatures.”

Riddlesperger said he understands why voters feel he is less serious than a governor candidate is expected to be, but he said he thinks Friedman may be misunderstood by the population.

“This may be slightly for self-promotion, and people might be put off by his jokes,” Riddlesperger said. “But I read somewhere that he said he is most serious when he’s joking. Kinky is going after the vote of the disillusioned voter; he’s going after the ‘honky-tonk’ vote.”

Friedman rounded out his discussion by saying that if young people vote, they can run Texas. He referenced the weight of young voters, a group he said he needs in order to take the governorship.