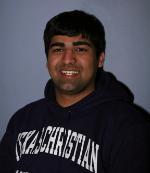 To 21-year-old Sri Vempati, everything was possible, his physics teacher said at the memorial service held in his honor Wednesday morning.

About 100 of his friends and teachers gathered in Tucker Technology Center to share stories about Vempati, who died due to head injuries following a car accident Sunday morning.

Magnus Rittby, professor of physics and astronomy, said that when he lectured on the speed of light, Sri announced it was perfectly possible to travel faster than the speed of light. When asked why, Vempati would reply, “Why not?”. Rittby said this embodied the kind of positive thinking that suggested anything was possible to Vempati.

Aside from being a triple major in biochemistry, computer information technology and mathematics, Vempati’s friends identified him as a talented multitasker, a heated debater and an excellent bowler.

Jeff Thompson, his supervisor at the Computer Help Desk, recalled a time when the staff planned a social night of doing something no one was good at: bowling. Thompson laughed as he said that Sri achieved a nearly perfect score, beating his co-workers by substantial amounts. They later found out he played on a league during the week, he said.

Vempati’s co-workers recounted many shifts spent with Vempati discussing everything from religion to Batman.

“I learned so much about college from him,” said Brosnan.

Vempati’s teachers and classmates shared memories of his enthusiasm for learning and his persistent questions that entertained their classes.

“We bantered constantly in the lab,” a classmate said. “He didn’t think like anyone else. When you finished a conversation with him, you were probably irritated, but also in awe.”

Stories were shared at the request of Vempati’s family members, who were pleased to see he had made a home at the university. His mother, uncle, two aunts and cousin were in attendance at the memorial.

“Having sent her son off so far away, his mother wanted to see his school, his friends and his teachers,” Vempati’s uncle Rama Penumarti said. “At home Sri had a large family with many cousins. We are glad to see he has such an extended family here.”

Funeral arrangements will be made by the family in India.