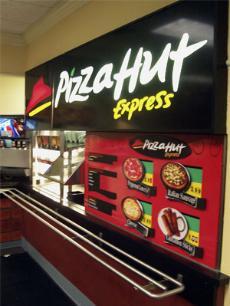 Frog Bytes may soon be getting a major face-lift with the departure of the Pizza Hut brand and the welcoming of another.Changes could begin as early as the end of the semester, said Rick Flores, general manager for Sodexho Campus Services.

“We’re in the fact-gathering stage to find a new brand to fill that space,” Flores said.

“We are looking to have full-size pies and sell them either whole or by the slice,” Flores said.

Although Flores said Pizza Hut’s sales have been steady over the years, Aboto said Sodexho will look for a brand that will show a consistent increase in profits.

“It is used more as a default choice and not a destination,” Aboto said.

As of right now, possible pricing changes are undetermined, Aboto said, and depend on the brand Sodexho decides to use.

Earlier this semester, Dining Services met with four focus groups to discuss the Pizza Hut issue, Aboto said. They consisted of males and females and were separated into groups of freshmen, sophomores, resident assistants and the Student Government Association.

“Pizza Hut is hot or cold,” Aboto said. “Students either like it or not.”

Flores said the imminent move to the new Student Union also poses a problem, especially in regard to equipment needed, such as new pizza ovens.

“The question is whether we should make a large investment on something that may not be here in a year or two,” Flores said.

Although the plans are still being formulated, some students say they feel the possible changes could enhance pizza sales.

Vanessa Vargas, a freshman accounting and finance major, said she eats the pizza offered now about once a week, and the proposed changes shouldn’t make a huge difference.

“As long as it is pizza, people are going to buy it,” Vargas said.