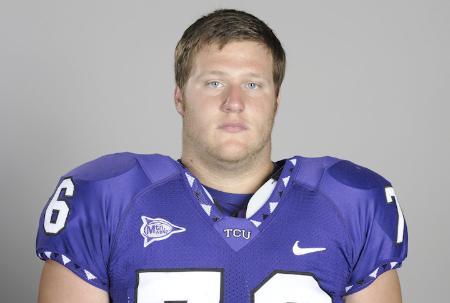 When Blake Schlueter graduated, Horned Frog fans worried that his replacement would not be as successful. But senior Jake Kirkpatrick filled the void and more. All it took was one year of high school football.

Kirkpatrick said he transferred to Robert E. Lee High School in Tyler his senior year because his private school growing up did not have a football team.

“My parents weren’t too happy about it,” Kirkpatrick said. “They didn’t think it was a good idea.”

Although it was his first time to play football, he earned the starting tackle job. In fact, he was good enough to earn a home visit from TCU head coach Gary Patterson. During the visit, Kirkpatrick said Patterson offered him a scholarship.

“I was new to the whole recruiting process, especially football,” he said. “But I was excited. Very excited.”

Kirkpatrick described his role as center as a full-time job. He constantly receives advice from coaches and former players to help him deal with any pressure.

“There’s always going to be people saying stuff,” he said. “But all we can do is go out there and do what we know how to do and work hard.”

Kirkpatrick said he sometimes wonders how his life would be different if he never transferred to Robert E. Lee High School. He said he most likely would have enrolled at Texas A&M University like the rest of his family, but is glad he chose TCU.

After getting married during the summer, he started adjusting to his new life. He said living with his wife is a little different than living with former roommates quarterback Andy Dalton and tight end Evan Frosch.

“My wife Callie is a little neater than they are,” he said.

Kirkpatrick is pursuing a degree in entrepreneurial management, but hopes to play football professionally after he graduates. Maybe, once again, one year of starting will be enough to make it to the next level.