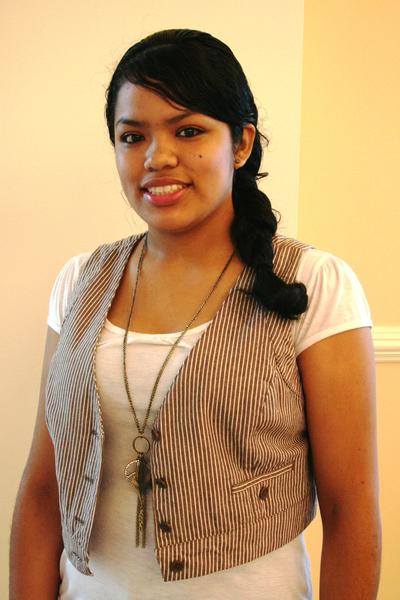 At the age of 10, junior math major Clara Ramirez arrived in the U.S. from Apaseo el Grande, Mexico with no knowledge of the language of her new home.

After witnessing her parents’ struggles with the language barrier at a pediatrician’s office, Ramirez, who is also a pre-med student, said she knew she wanted to learn to speak English so she could help others who could not.

With the help of the Jack Kent Cooke Foundation’s transfer scholarship, Ramirez transferred to the university this fall from Northeast Texas Community College. According to the foundation’s website, the award supports outstanding community college students with financial need who wish to finish their degrees at four-year institutions.

She continues to pursue her goals of becoming a pediatrician to reach out to the Hispanic community. The scholarship, which covers any costs not covered by the university or the Free Application for Federal Student Aid, is awarded to only 40 people in the nation.

Why did you apply for the scholarship?

“I didn’t even know about it until my honors professor told me about it. It was a really long application process, but I wasn’t going to lose anything by applying for it. I’m doing pre-med and I want to go to medical school and that’s going to be expensive, so I didn’t want to have a lot of loans when I go to medical school.”

Were you surprised when you were selected to receive the scholarship?

“I got my acceptance letter for TCU on a Friday and a week later they had a faculty meeting [at the community college] and they invited me because they said they had something to tell me. I went to the meeting and that’s when they told me I got the scholarship.”

What kept you motivated to keep going when things became tough?

“I came here [to the U.S. when] I was 10 years old and I didn’t understand a single word, but my teachers would listen to me. Mrs. Bowers, my fifth grade teacher, would give me tutoring after school so I wouldn’t fall behind in my classes. I’m the oldest one out of three and I needed to set a good example for my brother and sister.”

Why did you choose your major?

“[When] I got here, I remember the first time we went to the pediatric clinic. My mom wanted to know what was going on, but it was frustrating for her because she couldn’t understand the doctor. I’m thinking of becoming a pediatrician. I want to reach out to the Hispanic community.”

Do you have any advice for other students with multinational backgrounds who are in the same situation you experienced?

“I think the main thing is that you don’t give up. There are some people that aren’t going to believe in you. I had some people that didn’t think I was going to make it, but there are other good people who you can go to for support and encouragement.”