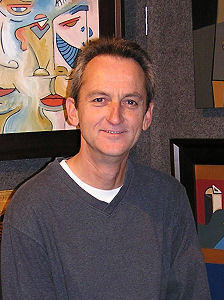 J. Lynn Kelly, a studio art major at TCU, was announced as the winner of the Fifth Annual Catholic Foundation Plaza Artists Competition for his piece titled “Downtown Playground.” Growing up, Kelly said he always loved when people admired his creations, and he now takes his own personal experiences as inspiration for his art. Although Kelly initially worked in the printing business and stayed there for 30 years, he has been a full-time artist for the past six years. “Downtown Playground,” which highlights the Dallas Arts District, will be displayed for a year.

When did you first realize that you wanted to become an artist?

“Oh I think I knew that when I was nine years old. I love when people admire my creations. In fact, right now in my 3-D class at TCU, I am partnering with a girl in the class, and we both decided yesterday afternoon that we wanted our final project to be so much better than everyone else’s that theirs won’t even get noticed. We are both very competitive about the art that we produce.”

Would you categorize your art into a specific style?

“That is a tough one; it is hard to put a title to these kinds of things. Another modernist named [Fernand] Leger, I love that particular period and those looks. In a way I’m stuck in the past in my preference in the look of modern art, which is really one of the reasons why I decided to go to TCU. For the exposure and what the professors there had to offer. Cubism is one of my favorites…there is a lot of cubism in my work.”

What would you consider your first major artistic accomplishment and how did it make you feel?

“I don’t even remember what it was, I was in seventh grade I think, when I won some sort of state recognition for painting one of those trees. What a feeling that was! It came as a complete surprise, too. I don’t remember the details, but I remember how it felt. How you feel about your own art is one thing, but when other people recognize it, I guess we really should not depend on that kind of feedback, but it feels good when it happens anyway.”

What made you enter the Fifth Annual Catholic Foundation Plaza Artists Competition?

As an artist, you have to look hard, and I look for so many different opportunities, and I am not sure where I first saw the foundation notice, but as soon as I did, of course, I thought, “I’m gonna win that.’ And when I did the painting I thought, “This painting is going to win.’ In fact, everyone who came to my house while it was sitting there finished, waiting to give to them, was just drawn to it. So I thought, “Man, that’s it.'”

Where there any specific reactions to your painting for the competition?

“Well first off, I deliberately painted the background, the outlines of Dallas buildings, in a dark way to bring attention to the foreground of the Dallas Arts District. In the highlighted foreground with a dark background, it really brings that foreground to life.”

What were the guidelines for the competition?

“They were very specific. First off, (for) most competitions you submit a digital image of your work, but in this case they require that you give them the original. Your original must be exactly nine and two-thirds [inches] by 28 [inches]. So I built a canvas, I used a paint gallery-wrapped canvas. I built a piece exactly that size, and that’s so that when they blow it up to the allocated plaza wall space, it fits right. Another part of the competition that was kind of strange is they get to keep the original if you win, and some of the runner-ups. They have the option of buying it from the artist for $250, which is the only downside because that is a pretty low price. I would never sell a painting that size for $250, but that is just one of the risks.”

How long did the painting take you?

“Way too long. I sweated over that thing because I really did have this conviction that I was going to win and, in case it won, I kept thinking that if this little, bitty painting is expanded to a 10 by 28 feet, every little flaw is going to show up. So I was really meticulous about making sure it was flawless.”

What exactly did you win?

“The grand prize is $2,500 and the piece stays up for a year. The Catholic Church that’s in the arts district [has] the plaza space across from the [Morton H.] Meyerson Symphony [Center].”