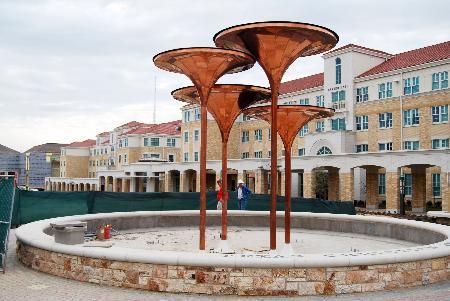 After its removal in May 2006, the flutes of Frog Fountain have returned to their rightful place.

The fountain was taken down to make room for residence hall construction and for repairs.

No date is set for when water will flow in the fountain, Chancellor Victor Boschini said. Construction crews are working as quickly as possible to return life to the fountain, he said.

Boschini said students will notice a couple differences between the old and new fountains. The fountains are in the same relative location they have been in for the last 38 years, and the flutes were assembled in the exact manner they were taken down.

The biggest difference is the size of the base and the plaza the fountain rests on, Boschini said. The pool is larger in diameter and the tiles have Horned Frogs on them. The walkway will make the fountain more accessible. Students will be able to sit around the fountain and look at the purple and white flowers of the landscape.

Don Mills, vice chancellor for student affairs, said the landscaping will be in place by early March.

“The fountain has a lot of meaning to a lot of different people,” Bing said. “I was sad to see it get taken down, and I have been waiting for its return for a long time.”

Sarah Wetzel, a senior fashion merchandising major, said she hopes the fountain will be working for her graduation in May.

Boschini said the university planned on having the fountain working for the December commencement ceremony but was delayed because of piping problems.

Instead, a life-size mural of the fountain was available to take pictures in front of at the Dee J. Kelly Alumni Center after commencement.

“The mural was so accurate that the fountains looked life-like in photographs,” Boschini said.

When Frog Fountain is complete, there will be a dedication ceremony. At the ceremony, the student body president will turn on the fountain in compliance with a TCU tradition that began in 1969, Boschini said.