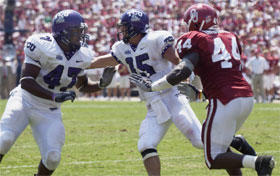 In discussing the Horned Frog backfield, overlooking sophomore fullback William Jackson is forgivable. People may see the usual suspects such as Lonta Hobbs, freshman phenom Aaron Brown, Tye Gunn or maybe even recent star Jeff Ballard, who led the Frogs to the team’s recent victory over Brigham Young. But consider this: When Cory Rodgers scored the game-tying touchdown in overtime against BYU, it was a block by Jackson that cleared the way.”Rodgers would not have scored if it wasn’t for Jackson making that block,” running back coach Mike Schultz said.

Jackson, the starting fullback for the Frogs, does not get the kind of attention that some of the other key players on the team receive, but coaches are quick to point out that it does not keep Jackson from working hard and doing what he should on the field at all times.

“To be the starting fullback here, you have to be very unselfish,” Schultz said. “Will just comes in and does whatever it is we ask of him.”

Schultz notices the small things that the average fan might not see.

“Jackson blocks really well,” Schultz said. “He does a lot of little things that are crucial for us to win games. You can see him getting better every time he steps on the field.”

Schultz is not the only coach who has noticed the development and selfless attitude of Jackson. Head coach Gary Patterson has noticed his fullback’s improvement.

“He’s been getting better every week,” Patterson said. “He made a big block on the last touchdown Saturday. Where he is now and where he was three weeks ago are completely different.”

Although this is Jackson’s first time being a regular starter for the Frogs, he said he still approaches each game the same way.

One thing he has improved is his ability to read the defense.

“My mind-set going into the games is still the same: I just try to stay focused,” Jackson said. “I have gotten better at picking up the blitz packages teams come with, and that has helped me create better holes for the other backs.”

Jackson said he is fine with not getting the same amount of recognition as some of the other backs on the team, but he admitted that he enjoyed rushing into the end zone at BYU for his first career touchdown.

“It felt good,” Jackson said, unable to hide his smile. “It was my first touchdown, and I almost had two.”

Jackson’s line from the BYU game exemplifies the type of work he does consistently. He carried the ball four times for four yards and one touchdown. Short, simple and efficient.