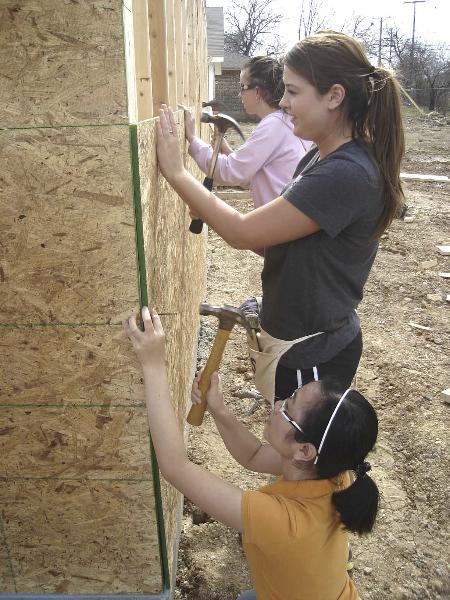 This year’s FrogHouse team has already raised more than $42,000 over the past two semesters and students working for the group say they are still working hard toward their goal of $56,000 despite a weakened economy.

The team has worked since the beginning of the school year to raise money and build a house for someone in need. For the third year in a row, the junior class has teamed up with Habitat for Humanity to build a house for less fortunate.

Jared Cobb, assistant director of TCU Transitions, said the team typically does all the fundraising in the fall and this was the first year they have done a letter-writing campaign. Each of the ten FrogHouse directors reached out to family, friends and classmates in a letter asking for their help in donations or contributions in any way they see fit.

While the directors of the program are all juniors, volunteers from any classification and age are welcome to contribute.

Chris Volpe, executive director of FrogHouse, said the letter-writing campaign wasn’t as successful as they had hoped due to the economic downturn.

Anje’na Smith, FrogHouse’s director of fundraising, said the organization has many programs to help the team get donations such as going door-to-door asking for contributions.

Volpe said they extended the fundraising into this semester because they hadn’t reached their goal yet. The group coordinated a fashion show called “TCU Project Runway” that took place March 4. The event had resident assistants creating their outfits with last semester’s theme of “think purple, live green” in mind, Volpe said. They targeted resident assistants in order to raise money from their residents in their dorms.

The directors in the class of 2010 involved with FrogHouse received the Youth Award by Habitat for Humanity for hard work in the planning process before the building of the house started. The organization gave this award to the FrogHouse team for showing enthusiasm for Habitat for Humanity and making a valuable contribution to their affiliate.

The new homeowner is Alice Villegas, who lives with some of her children and grandchildren, seven people in all. She has worked at the Southwest Regional Library for five years.

Volpe said while the FrogHouse team doesn’t help pick the new homeowner, the application process is rigorous. He said the potential owner has to show that he or she has a steady income. Volpe said it is also required that the owner put in 300 hours of “sweat equity,” working in the construction of other Habitat for Humanity houses as well as their own.

The potential homeowners who are receiving the house aren’t given a home for free. They have to pay their mortgage on a zero-interest loan. Those mortgage payments are then used to build more houses by Habitat for Humanity.

The FrogHouse team travels to the building site every Friday and Saturday of the semester. The house is scheduled to be completed May 2.