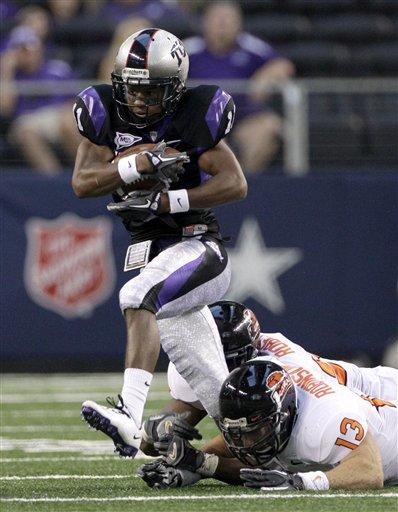 The TCU football team will have to continually prove themselves to receive recognition on a national level, even after the team’s performance against Oregon State on Saturday, Horned Frog head football coach Gary Patterson said.

“No matter what we do and how we do it, we’re always having to prove ourselves,” Patterson said. “That’s okay with us.”

Quarterback Andy Dalton said he thinks the national spotlight and national attention for TCU will pick up after Saturday’s game.

“We’ve set ourselves up to have some national goals,” Dalton said. “People are starting to portray us as one of the national teams that are pretty good.”

TCU will use the underdog mentality in their favor, center Jake Kirkpatrick said. He said the team will have to work hard to prove that the Frogs deserve their ranking.

“We’re always going to have that chip on our shoulder, that’s just the kind of team we are,” Kirkpatrick said.

Patterson said TCU will continue to prove themselves in upcoming games against non-conference opponents.

The Horned Frogs started proving themselves Saturday after beating OSU 30-21 in front of a crowd of 46,138 at Cowboys Stadium.

“If there’s a stadium better to play in than this one, as far as the crowd and all the things that go along with it, I want to know what it is,” Patterson said.

Dalton gave up his first interception of the season early in the first quarter. Dalton’s pass was intercepted by OSU for a 21 yard return, leading to the first touchdown of the game by wide-receiver James Rodgers.

Dalton said he did not let his mistakes, including his interceptions, affect the rest of the game.

“I knew I had to come back and play well for us to win this game,” Dalton said. “At times I made some mistakes but I also felt like I made some good plays in this game.”

Dalton gained momentum after the OSU touchdown and carried the ball to earn his first touchdown of the season for the Frogs, tying the game 7-7.

The second quarter was a repeat of the first with the Frogs trailing the Beavers until the last minute. OSU faked a punt return, much like Boise State in the Fiesta Bowl, which led to a touchdown by the Beavers bringing the OSU lead to a touchdown.

“It seemed like every time we were down in this game we came back, drove down and scored,” Dalton said. “It was something we had to do really to get the momentum back in this side.”

TCU took the lead for the first time with 49 seconds left in the first half, leaving the game 21-14 at the end of the second quarter.

During halftime the roof was opened, allowing the Texas humidity to enter at Cowboys Stadium. Patterson said he did not know the roof was going to be open until he came out on the field Saturday.

The TCU lead lasted halfway through the third quarter until OSU running back Jaquizz Rodgers drove his first touchdown of the game. Rodgers’ touchdown brought the game to another tie, 21-21.

Despite the even coverage early in the game, the Frogs’ total possession nearly doubled that of OSU.

Dalton kept his feet quick during the third quarter when he carried the ball earning his second touchdown of the game, bringing TCU back to lead 28-21. Dalton’s two rushing touchdowns were his 17th and 18th career rushing touchdowns.

Both the Horned Frog and Beaver defenses stayed strong during the fourth quarter not allowing any touchdowns by either team. TCU offense made 28 first downs, compared to the Beavers’ 13.

The Frogs strengthened their lead at the end of the fourth quarter after a safety added two more points to the TCU scoreboard.

“The safety was a big deal,” Patterson said. “You go up by nine and you play the game a lot different.”