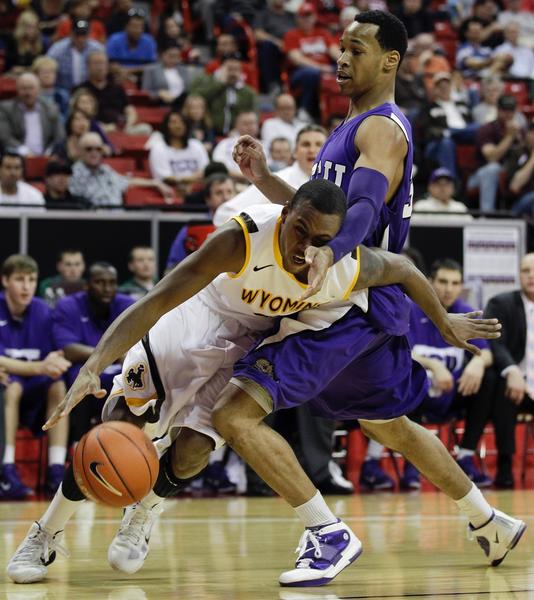 Bring on top-seeded BYU. The Frogs wiped the slate clean Wednesday, ending a 13-game losing streak and upending the Mountain West Conference’s No. 8 seed, Wyoming, 70-61 in the opening round of the Conoco Mountain West Championship at the Thomas & Mack Center.

With TCU’s first win since Jan. 12, which also came against Wyoming and was the Frogs’ only regular season conference win, the Frogs improved to 11-21 overall this season, while Wyoming dropped to 10-21.

TCU, the bracket’s No. 9 seed, built a double-digit first-half lead that turned into a one-point Wyoming edge midway through the second half. A layup by Cowboy guard Joe Hudson following a Frog turnover gave the squad a 42-41 lead with 13:26 remaining, but the Frogs responded with a 9-0 run and never looked back. Hill hit one of his three second-half 3-pointers to put TCU back on top for good.

Hill’s 18 points came on a 6-of-11 showing from the floor, including 4 of 5 from 3-point range. His performance came on the heels of a career-high 23-point effort in the regular season finale at Air Force.

Junior guard Hank Thorns, who played all 40 minutes for the seventh time in 10 games, totaled 16 points and nine assists, his 13th game with at least nine assists. Junior guard J.R. Cadot also had a solid game for the Frogs, recording his third double-double of the year with 13 points and a career-high 13 rebounds. Cadot dominated the glass, pulling down six boards on the offensive end of the court alone.

TCU rode a strong early defensive effort while jumping out to a double-digit lead in the game’s opening nine minutes. The Frogs held the Cowboys to only 3-of-21 from the field overall to start the game before Wyoming found its offense.

Cadot boosted the Frogs in the first half, matching Thorns for the team lead with seven points while he added a game-high seven rebounds in the period. Included among his baskets was a slam after sailing in to grab a rebound off a Thorns missed layup.

TCU led by as many as 11 points, 21-10, after a Cerina layup with 7:42 remaining in the first half, but Wyoming regrouped to cut its deficit to only three at halftime. Thiam totaled six points to lead the Cowboys on an 18-10 run to end the half. The squad drilled a pair of 3-pointers after missing its first seven to begin the period.

The Frogs extended their lead to seven points early in the second before the Cowboys went on a 16-8 run to take their first lead of the contest.

TCU continues its MWC tournament run Thursday when it faces top-seeded BYU at 2 p.m. at the Thomas & Mack Center. The game will be televised by The MountainWest Sports Network.

TCU snapped a 13-game losing streak, the longest in-season skid for the Frogs since the squad dropped the final 21 games of the 1976-77 season.

The Frogs also snapped an 11-game losing streak in games played away from Fort Worth dating back to the Dec. 8 win at Texas Tech.

The victory ended a three-game TCU losing streak in MWC tournament first-round games. The squad’s last victory in the tournament was a 62-54 win against New Mexico in the 2006-07 tourney.