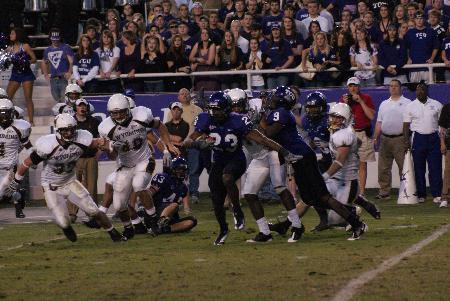 With the Frogs’ 44-14 victory over the University of Nevada, Las Vegas, the Frogs moved up one spot in the BCS ratings for the third straight week.

TCU now rests in the No. 12 slot in the BCS poll. Being ranked No. 12 means the Frogs can qualify for a BCS game with an at-large bid, provided they come out on the winning side of a Thursday showdown with the University of Utah and leapfrog fellow BCS hopeful Boise State, which currently sits at No. 10.

Sophomore quarterback Andy Dalton led the way for TCU on Saturday by completing 16 of his 29 passes, throwing for 151 yards and three touchdowns. Dalton also added 52 rushing yards on nine attempts.

Senior running back Aaron Brown led the team in rushing with 60 yards on nine carries. He also scored his second touchdown of the season.

On the defensive side of the ball, junior defensive end Jerry Hughes recorded four tackles, including two sacks. He now has 14 sacks on the season to lead the nation. Hughes also received his third Mountain West Conference Defensive Player of the Week honor.

As for the rest of the defense, despite allowing 108 yards on the ground, the team is still ranked No. 1 in the nation in run defense, allowing 38.9 yards per game. The next closest team is No. 1 Alabama, which allows 65.6 yards per game.

Now, a win Thursday night for the Frogs will clinch at least a share of the Mountain West Conference title.